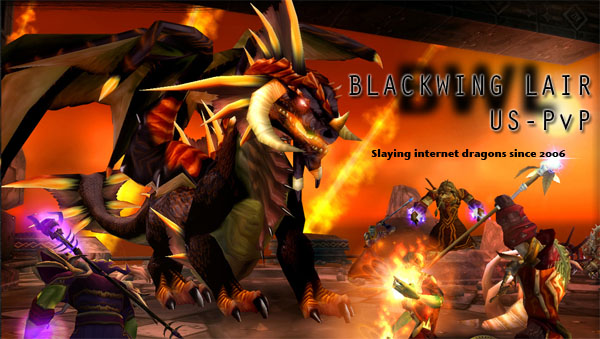 Blackwing Lair is a close knit group of players. Those who leave rarely seem to stay away for long. At the very least, they seem to remain lurking on the server's forums.

If you're looking to transfer to Blackwing Lair the general attitude is "Alliance or go away!". Not that the server has too many Horde players, but it has far too few Alliance players. Typically, even the resident Horde do not want new Horde transfers as further imbalance hurts our world PvP.

Note killing a boss on the same raid night is considered a TIE due to different raiding schedules.

The following tables represent the progression of the server. The bosses listed are the bosses guilds have downed not bosses the guilds are currently working on.

Italics indicates that the guild killed bosses out of order and has only killed the bosses listed.

Trial of the Crusade Bosses are to be listed in white, and green for normal 'Cleared'.

Trial of the Grand Crusade Bosses are to be listed in yellow, and yellow for heroic 'Cleared'.

Encounters with multiple hard modes will be tracked as follows

From the Horde point of view, "Do Alliance even exist on this server?"; from the Alliance point of view "They're everywhere man!". This is why nearly all World PvP objectives are controlled by the Horde.

Alliance tend to only engage in the World PvP objectives when after particular PvP Rewards. On occasion, guilds will 'stir the pot' and create mayhem for a few hours, and sometimes a Pug group will be successful. Though nearly all these cases are ended when the Alliance is zerged by the Horde.

Several events have been planned via Blizzard's World of Warcraft Blackwing Lair realm forum and carried out with varying degrees of success such as Hillsbrad Wars.

Alliance tend to feel that they can go to any zone (especially Northrend zones) and create a large fight with many Horde quickly rolling in. Horde tend to feel that Alliance are wimps and never want to PvP. Alliance claim that it is because they get so much of it, and sometimes have other farming/questing objectives in mind. Many Alliance do in fact enjoy world PvP but with the 4 to 1 ratio it can be daunting, however recently there has been a shift and more alli are engaging horde in pvp situations. Alliance would very much like to see more numbers added to their ranks on this realm.

Programmed To Be Awesome: http://www.ptbaguild.info/

The Legends of The Horde http://legendsofthehorde.guildlaunch.com

The heart of this realm page was designed and set up by former Blackwing Lair server resident Loktari of <Crowd Control>. If you have questions, concerns, suggetions or any other need please create a new post on the Blackwing Lair Forum. "I hope that this page will serve the community well, I have put a lot of time and effort into making it for the betterment of our realm."

This page is maintained by <Tunnel Vision>

Mefistopalez of <The Will of Medivh> is credited with

Retrieved from "https://wowwiki.fandom.com/wiki/Server:Blackwing_Lair_US?oldid=2820127"
Community content is available under CC-BY-SA unless otherwise noted.