<Avatar of the Totally Aweosme and Wicked Sweet>

Currently level 4 (The Level being levels of Totally Awesome, and not your standard player level) Paladin

Currently the Argent Dawn server, has known to frequent the Blackrock server for boot to butt action.

A paladin of unbridled awesomeness who trancends the very word "awesome" itself. Dedicated to educating the mass of wusses on every aspect of awesome.

Ubarlight likes long walks on the beach, intellectual discussions on who is cooler and the proper mechanics of eating melons, spamming duels to wusses and hitting on women. OH YEA!

Ubarlight is a personality on the Argent Dawn server. Since (apparently) being forced to move due to the Roleplay server naming restrictions he has continued his adventures on Blackrock, but reports back regularly to us lesser mortals via the Argent Dawn forums. (Some of his antics, as a level < 10 character, are genuinely impressive, but his braggadocio is much more so.)

The creation of this character was likely due to tensions between the Argent Dawn and Blackrock servers during the first six months after release. The Blackrock servers often crashed upon release due to high population. As a protest to Blizzard, certain members of the Blackrock server decided to stage a protest involving a million gnome march into Ironforge. As a result, the Argent Dawn server was overloaded and crashed. The character is likely meant as a parody of this so-called PvP player mentality, for indeed roleplayers are mere lackluster wusses in comparison.

As of Sunday, February 10th, Ubarlight was spotted in many locations in Azeroth on the Argent Dawn server defending the wusses of Argent Dawn from the Gnomish Blackrock Invasion. He was successful and the Gnomes have fled in terror back to their crummy cesspool of a server.

Rumors have been floating around about an Ubarlight machinima movie in production, with a large cast of well known Argent Dawn characters, but this has not been confirmed.

There are rumors of Valkors being Ubarlight. These rumors are infact untrue, as Valkors (a fan of Ubarlight) was the original creator of the Ubarlight page on WoWWiki and thus all articles related to Ubarlight that he created have been categorized under his name due to the WoWWiki organization system. 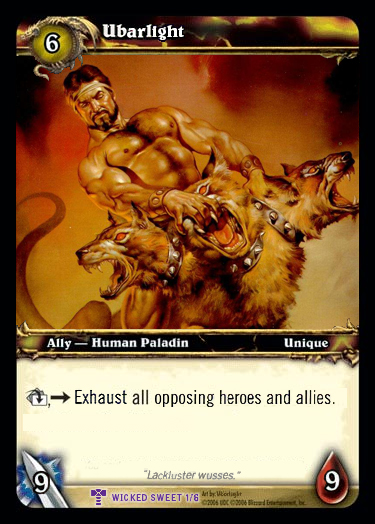 Rumors of an Ubarlight card for the World of Warcraft Trading Card Game circulated around the WoW forums.

Retrieved from "https://wowwiki.fandom.com/wiki/Server:Argent_Dawn_US/Ubarlight?oldid=1200328"
Community content is available under CC-BY-SA unless otherwise noted.