The Argent Dawn for which the realm is named after, is an organisation of Holy Light zealots. Whilst the Argent Dawn are not as extreme as the Scarlet Crusade, they are known for their aggressive stance against the Burning Legion and undead Scourge.

As a roleplaying realm, Argent Dawn is subject to special rules that do not apply on Normal or PvP realms. New players are expected to adhere to these rules, as they are enforced by Blizzard. These rules include (but are not limited to):

Further information about the Argent Dawn realm can be broken down into three categories:

In season one of the Arena Ladder, Argent Dawn was noted in the World of Warcraft Armory Hall of Fame for not having a single team in the top ten for any of the three categories of the Bloodlust battlegroup.

Whilst all realms share one common storyline and history, they all deviate slightly because of player created storylines and content. Every single realm is theoretically an alternative world; where the timeline, whilst having key points (eg. Blizzard-created events,) still has unique Player-created events, stories and adventures that only exist on that single realm. This makes each realm special in it's own right, and Argent Dawn (Europe) is no exception.

Communities of the Dawn

Players on Argent Dawn are encouraged to create small scale and realm-wide communities that help to foster a good roleplaying environment with an inclusion of all players.

Many people consider Argent Dawn to be one of the premiere roleplaying realms in the World of Warcraft game. It is unquestionable that Argent Dawn (Europe) is home to many excellent roleplayers, and that the players in general are working towards a strong and friendly community. However, the players must stay strong and work together (welcoming new players) if a community atmosphere is to become fruitful. The community is also victim to a split between the individual opinions of the many roleplayers. A case here would be that people want to keep their own roleplay traditional, whereas others want their's as well. An agreement does not seem to be within reach, and many roleplayers take up their fights to the public forums in attempt to force out those with different opinions.

A good way to check on the current status of communities, groups and guilds for RP would be looking at the realm forum, asking in public channels (such as GuildRecruitment) or simply scouting around.

The following channels are open to any player on Argent Dawn and are primarily concerned with helping the community to some description. If you know of any additional public channels, feel free to add them to this list. To join a new channel, type /join ChannelName.

The Argent Archives (also known as AA), maintained by Alabast and his team, provide the realm with roleplaying resources. Registered characters are allowed to have their own character pages, upload screenshots and drawings and also are allowed to publish articles, adventures, documents and more. Guild masters are allowed to create pages for their guilds with the guild's information, recruitment status and more.

The following organisations are defined as raiding communities. A raiding community usually comprises of two or more independent guilds, and/or individual members. Raiding guilds are listed in the guild tables further down this page.

Argent Dawn has become a very creative community with many people creating resources, projects, artwork, stories and beyond, all in the name of or relation to Argent Dawn. It is those contributions that help to create and inspire a community to build upon the realm, and the resources in this section are in no way a completely exhaustive list of every contribution ever made. 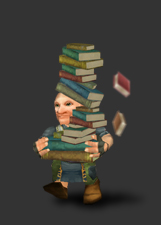 Bootse - A clerk at the Argent Archives

Guilds of the Dawn

The following is a list of guilds based on Argent Dawn (Europe), if you wish to add your guild to this list but are unsure how to safely edit the list, please refer to the Editing Help page. If you wish to link to your guild website, do this via your Guild Name.

Retrieved from "https://wowwiki.fandom.com/wiki/Server:Argent_Dawn_Europe?oldid=2808494"
Community content is available under CC-BY-SA unless otherwise noted.