Sergeant Gorrok is one of the survivors of Hellscream's Fist in the Jade Forest. Judging by his appearance and lamentation when finally found, he appears to have been the leader of Hellscream's Vanguard, most of whom appear to have died in the crash of the zeppelin.

After being found, he makes his way south to Strongarm Airstrip.

Gorrok aboard Hellscream's Fist.
Add a image to this gallery 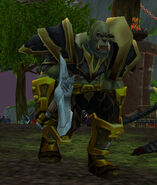 Gorrok at Hellscream's Fist when it was a subzone.
Add a image to this gallery

Retrieved from "https://wowwiki.fandom.com/wiki/Sergeant_Gorrok?oldid=2740629"
Community content is available under CC-BY-SA unless otherwise noted.