Serathil is a one-handed axe. It is a world drop, and one of few items to be in both Warcraft III and World of Warcraft.

This weapon was crafted on Draenor for Kash'drakor and used in the Blood River War that ended with the annihilation of the Dark Scar clan. Nazgrel is the last living relative of Kash'drakor.[1] 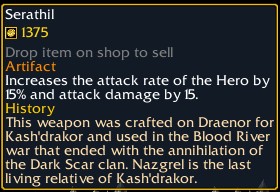 Rexxar sought to join the Stonemaul clan. Their leader, the tyranical Kor'gall, had discovered the ancient orcish axe Serathil and used the artifact to control the clan. He forced Rexxar to undergo the Trial of Strength, running a monster filled gauntlet, to join. Rexxar succeeded, but Kor'gall still refused to help the Horde. Rexxar sensed the corruption within Kor'gall and slew the ogre chieftain in the Trial of Blood, earning Serathil and assuming control of the clan to lead them against the Alliance.[2]

Retrieved from "https://wowwiki.fandom.com/wiki/Serathil?oldid=2828207"
Community content is available under CC-BY-SA unless otherwise noted.