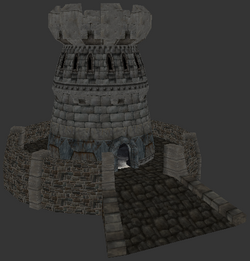 Scout towers are tall, sturdy structures constructed to guard the borders of many settlements. From these sites, the defenders of Lordaeron can spot enemy troops from high above, making it difficult for the orcs to launch surprise attacks. Their presence in the wildlands assures the swift deployment of our armies to meet any orc incursion. These towers may be outfitted with either deadly bolts that can pierce targets on land, sea, and air or with great cannon that while powerful, cannot attack threats from above.[1] (W2Man 52)

Scout towers may be constructed at almost any location to provide continuous on-site observation. The towers are also the first necessary step in human town defense. These structures may later be upgraded to guard or cannon towers.[2] (W3Man 13)

This enhancement is used to allow towers to see units that are invisible. Everything seen through the sentry’s effect is much sharper and more vibrant than what the naked eye can perceive.[2] (W3Man 13)

Scout towers are very common in World of Warcraft and can be found all over Azeroth and beyond. However, a lot were destroyed, especially the ones in Lordaeron. A famous scout tower is Sentinel Tower on Sentinel Hill.

This list is the number of scout towers in the zones of Azeroth and Outland. (Zones without a single tower are not counted.)

Retrieved from "https://wowwiki.fandom.com/wiki/Scout_tower?oldid=2237178"
Community content is available under CC-BY-SA unless otherwise noted.