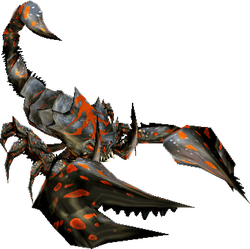 Scorpids are quick, vicious, poisonous predators who stalk sand dunes in search of prey. Scorpids possess a strong racial identity; they band together to fight interlopers, form family units called nests, and willingly ally with other scorpids. Scorpids eat meat, including carrion, but prefer freshly killed food. They live underground, digging burrows in soft sand or earth. Scorpid females are indistinguishable from males to the naked eye, but after giving birth, a scorpid female carries her young on her back until they are old enough to fend for themselves (a period of 2-3 weeks). On average, a scorpid female gives birth to ten to twenty live young at a time, each one no bigger than a rat.

Scorpid young routinely molt, shedding their old, soft skin and growing a harder carapace in its place. Scorpids molt 5 to 6 times before reaching maturity. Cautious travelers watch for shed scorpid skins when traveling in the desert.

Scorpids grow to about 3 ½ feet in length and 2 ½ feet tall. They are heavy for their size, weighing 60 pounds when fully grown. Scorpids come in many colors, including black, yellowish brown, red, and a mottled white that blends with moonlit desert dunes. A strange quality of the scorpid's carapace causes it to fluoresce weakly in certain underground environments, such as an area with phosphorescent plants, moss, or fungi.

Scorpids live an average of thirty years. Solitary scorpids retreat and seek out assistance if they know a fellow scorpid is close enough to render aid; scorpids always try to attack in groups if they can. As many scorpids as possible target an individual in combat before moving on to a new enemy. Scorpids can opt not to poison an enemy when making a sting attack, but they rarely choose to do so. Sometimes, though, scorpid groups reserve their poison and make nonlethal attacks to subdue weak enemies. They then drag the unconscious foe back to the nest to teach their young to kill.[1] (MG 119, 120)

They attack anything they perceive as a threat with their claws and venomous sting. Hunting and killing scorpid is considered a rite of passage by the Orcs. Scorpids are found in Durotar, The Barrens, the Burning Steppes, Thousand Needles, Uldaman, Desolace, the Blasted Lands, Blackrock Depths, Silithus, Tanaris, Shadowmoon Valley, and Terokkar Forest.

During the First War, conjurers were adept at summoning monstrous scorpions.

Though hunters can respec their pet scorpids into Cunning or Ferocity, they are inherently Tenacity. In addition to the abilities that come standard with all pets ([Growl] and [Avoidance]) and those given to their natural or retrained specialization, all scorpids are given the following:

Retrieved from "https://wowwiki.fandom.com/wiki/Scorpid?oldid=2742172"
Community content is available under CC-BY-SA unless otherwise noted.