Sacrificial magic is a magic that was considered the greatest violation of life.[1] The energies of Life, known commonly as nature magic, promote growth and renewal in all things.[2] However, energies can be so chaotic that they manifest as violent entities, pure fel magic form to lash out at all life. To fuel fel magic, but an insignificant sacrifice--a living fish or two, a few strands of seaweed--is required.[3]

Wild Seeds: Even the newest druid understands that life cannot simply be created from nothing.

Twisted Wrath: "When pushed to the brink, even the wild will make a necessary sacrifice for the greater good." - Jasmia, Nature's Chosen

The druid's magic derives from nature, enabling them to channel natural energies and transform into animals. The first druid was Malfurion Stormrage, who was taught the art by Cenarius, demigod of nature. Druids mantain a deep connection to nature through the Emerald Dream, a primordial realm that encompasses all aspects of nature.[4] 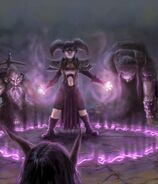 Warlocks are magical practitioners who seek to understand darker, fel-based magics, including destructive spells[5]—abilities that are designed to destroy. Do all spells destroy though? Refitting a spell for a new activity was not as simple as changing an incantation here, altering a motion there. It required a deep and precise understanding of how divination worked, of what it revealed and how. When a handmotion changes, or the type of incense used is deleted, the result is most likely complete failure, where the energies are dissipated harmlessly. Occasionally the energies may go wild and out of control, but usually the only result of a failed spell is a frustrated spellcaster. In studies, it was discovered that if a spell fails in a spectacular fashion, it indicates that the failed spell is very close to the final intended spell. The magics are trying to close the gap, to make things happen, though not always with the results intended by the caster. Of course, sometimes these failed magic-users did not survive the experience.[6]

Retrieved from "https://wowwiki.fandom.com/wiki/Sacrificial_magic?oldid=2802036"
Community content is available under CC-BY-SA unless otherwise noted.