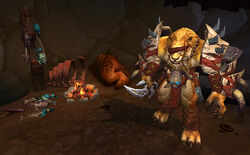 Saberon are bipedal, cat men found all across Draenor. They may have been misnamed "Sabron" in an official blog post.

The saberon are a race of tall, heavily muscled cat-men, in the same vein as the worgen. They have a tribal culture much like the furbolgs of Azeroth, but are nowhere near as friendly; they also seem to have a reciprocated animosity towards arakkoa, as shown in one of Terokk's visions. They are also highly adapatable creatures, being found in nearly every environment of Draenor.

The saberon are only encountered in Draenor; in the main timeline's Outland, no saberon are featured, meaning they were either driven to extinction or escaped through a portal during Outland's devastation.

From "Beasts of the Savage Lands – Nagrand"

Few creatures embody the savagery of Draenor as much as the saberon, vaguely feline beasts who have adapted to nearly all of this world’s diverse environments. From the icy caverns of Frostfire to the steamy jungles of Tanaan to the maze-like rocky outcroppings of Nagrand, there’s not a niche that the ferocious saberon haven’t conquered. Saberon outwardly appear more advanced than beasts; they have a social structure, and can shape simple tools into weapons. Adventurers should be especially wary of saberon hunting parties, whose coordinated attacks, sharp rending claws, and ability to shadowstep behind prey make them deadly indeed.[1]

WoW Insider Know Your Lore: The others of Draenor by Matthew Rossi Feb 19th 2014 11:00AM
Retrieved from "https://wowwiki.fandom.com/wiki/Saberon?oldid=2782522"
Community content is available under CC-BY-SA unless otherwise noted.