Start a Wiki
Ruins of Eldarath[32, 50] (aka Eldarath) is an ancient night elven city located in central Azshara. The Great Sundering caused most of the city to crumble to the oceans below. A cluster of ruins clings to the eastern cliffs, long shunned by night elves. More recently, treasure hunters and dwarf exploration teams have made tentative forays into the ruins. They have consistently been repelled by ferocious bands of naga who appear to have claimed Eldarath for their own. The powerful warlord Krellian controls the remaining ruins. It was a former Temple of Elune.

Since the events of the Cataclysm, it seems the ruins are more spread out, and now sea giants thunder through their area, controlled by their naga masters. Warlord Krellian has since moved to a station upon the Forlorn Ridge, and it seems he has left Lord Kassarus in charge within the temple.

(excluding the Temple of Zin-Malor)

Before the Sundering, Eldarath was one of the most beautiful cities of the night elves. Now in ruins, the naga have reclaimed it, and the powerful warlord Krellian controls the ruins from the shattered remains of Elune's temple. About half of the ruins of the city are deep underwater.[1]

There is a small camp located in the northern portion of the ruins that serves as a quest hub for the Horde. The quest givers are phased in and unlocked only after a series of quests are completed. 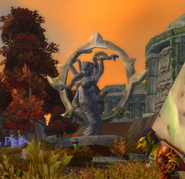 Retrieved from "https://wowwiki.fandom.com/wiki/Ruins_of_Eldarath?oldid=2841039"
Community content is available under CC-BY-SA unless otherwise noted.