The Ruby Sanctum is the red dragonflight's sanctum within the Chamber of Aspects beneath Wyrmrest Temple in Dragonblight. It is a raid dungeon with both 10 and 25-player normal and heroic modes.

The dungeon's release was delayed until patch 3.3.5a was released in Europe, a week after the US release, in an effort to make sure all players world-wide could access it at the same time. Even so, a large number of both US and EU realms were down for a 24-hour maintenance when the raid was opened.[1]

The sacred Chamber of the Aspects beneath Wyrmrest Temple has seen kingdoms and armies rise and fall throughout history. For over ten millennia, the dragonflights' five sanctums have remained hallowed ground for dragonkind, undamaged by the chaos of the Sundering and protected from the ravages of the Scourge thanks to a rare instance of cooperation between members of all five dragonflights.

The absence of guardians and the weakening of the structure are enough cause for immense concern among the members of the Accord, but far worse is the implication that the Ruby Sanctum, which contains the largest clutch of red dragon eggs and the future of the red dragonflight, might have been breached.

When a clutch of twilight dragonflight eggs was discovered within the Obsidian Sanctum, Korialstrasz asked the Council of Six to send adventurers to destroy them. The deed was done quickly, and without fanfare or acknowledgment. At first all seemed quiet, but then all communication with the guardians in the Ruby Sanctum ceased. The guards stationed at the portal were slain, and the mystic stones shattered. The implications of the Ruby Sanctum being breached are dire, and little is known of the identity of the attackers, as the black dragonflight's numbers in Northrend seem too limited to have pulled off such an attack. What power would dare to attack the stronghold of the red dragonflight, and how did they get past the guards undetected?[2] 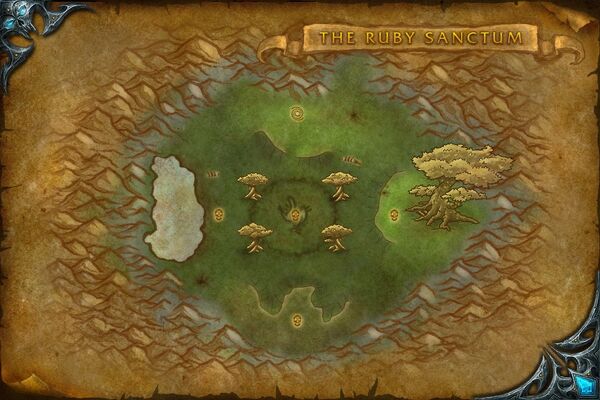 The black dragonflight has assaulted the sanctum and is attempting to destroy it to facilitate Deathwing's reemergence into Azeroth. Halion will be the primary encounter, along with three mini-encounters that must be completed prior to him. Unlike the Obsidian Sanctum, there are no progressive hard modes from leaving up some or all of the minibosses. Loot is comparable to that of the Lich King. Heroic Encounter of Halion Item Level 284, possible end-game content until the release of Cataclysm.

Retrieved from "https://wowwiki.fandom.com/wiki/Ruby_Sanctum?oldid=2843237"
Community content is available under CC-BY-SA unless otherwise noted.