Rotface is a boss in the Plagueworks wing of the Icecrown Citadel raid. The fight is a Battle for survival and requires good raid awareness, repositioning and some kiting.

This boss has been available since January 5, 2010 on US servers and January 6 on EU servers.

An ooze spawns when Mutated Infection is removed from a player (either by being dispelled or expiring). These merge into a Big Ooze and eventually explode.

These result when any two Oozes merge.

This fight has only one phase. One tank should keep Rotface in the center of the room. A second tank (or other seasoned kiter) needs to kite the big Oozes in a wide circle along the outer wall. The raid stands behind Rotface.

It's a good idea to mark the kiting tank, but raidmarks may be moved at random by some boss mods. If possible, use an [Argent Gruntling] with an [Orgrimmar Banner], or some other non-combat pet that follows its owner closely (usually a floating/flying pet, [Spring Rabbit's Foot] for example wouldn't be particularly useful for that purpose).

It's frequently recommended to use the DPS cooldowns at 30%. This is not a useful recommendation, since the encounter mechanics remain the same over the whole fight - there is no special enrage at low boss health. The only thing which changes is the Mutated Infection rate, the time between Infections slowly decreases. For this reason, it's best to use all cooldowns just a few seconds after the pull, as soon as everybody is in position. At that point, all damage dealers can maximize their output undisturbed from Infections or small Oozes. It's even possible to have the kiting tank help DPSing until the second Infection.

In regular intervals, Rotface uses Slime Spray. He turns in a random direction (this ability is not targeted on specific players) and sprays slime in a frontal cone, all raiders must quickly move behind him. It's easier to dodge this ability if everyone stands rather close to him (including ranged). Slime spray has a long range, so it can hit a Mutated Infection victims while they are dealing with their Ooze, in which case they need quick healing.

Some groups do not move for the Slime Sprays. This increases DPS time and makes it easier to track the off tank's position.

Dealing with these two elements is the key to this fight. In decreasing intervals, a random raid member gets Mutated Infection. This debuff ticks for some damage for 12 seconds, and then spawns a small Ooze with 500k aggro on the formerly infected player. Whenever any two Oozes get within 10 yards of each other, they automatically combine. The result of such a combine is as follos:

Big Oozes deal high melee damage, move at half speed and have a normal aggro table—thus they can be kited.

Because the intervals between Mutated Infections decrease, over time the number of oozes and slime patches increases, to the point where they get out of control and the raid wipes (=soft enrage). Kiting and merging Oozes is complicated by Professer Putricide randomly flooding a quarter of the room with poison slime. It's possible to run through short distances of poison slime by jumping, but it's a better idea to keep an eye on the pipes leading into the room and avoid the quarter which gets flooded next.

Whenever a Big Ooze has absorbed five other Oozes, Rotface emotes, and four seconds later the Big Ooze explodes. This deals heavy AoE damage around the Ooze, and additionally rains small globules of slime at random raiders. The targeting of these small globules takes place once the casting of Unstable Ooze Explosion completes, so everyone must wait to move until the cast is complete.

A major problem in this encounter are accidental merges of Small Oozes while another Big Ooze is already up. This leads to a "loose" Big Ooze, which usually aggros a healer, heads straight into the raid and kills everyone with its aura. Players trailed by Small Oozes must take care to avoid this. In the later stages of the fight, when Mutated Infections happen faster, accidental merges may happen nonetheless. The Ooze kiter must be aware of this possibility and quickly taunt surplus Big Oozes. Some raids pre-designate a second kiter who takes care of extra Big Oozes.

It may help to have one person call out what is happening. DPS/Healers can be told when to switch sides, and people with the slime debuff can be alerted. Situational awareness is required from every raid member.

During the heroic version of Rotface, Professor Putricide comes to the balcony and casts Vile Gas on random players. If enough players stand away from Rotface, Vile Gas is never cast on the melee group. Analogous to Rotgut, 8 players at range seem to be enough (in 25 player). It's important that Vile Gas soakers don't move into melee range when avoiding the ooze flood.

Ooze Flood - The Ooze Flood inflicts 5363 to 5637 damage every 1 sec and reduces move speed by 10%, stacking up to 10 times, for 5 sec. This means players (including the ooze kiter) cannot spend too much time in Ooze Floods or they eventually get rooted.

A Death Knight's Risen Ghoul minion has a chance to randomly generate the name "Rotface". 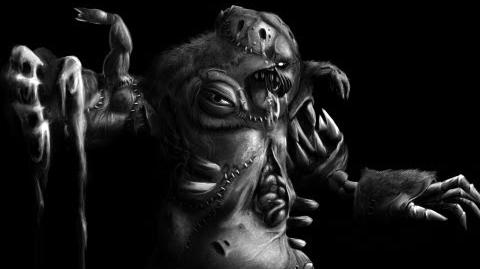 How to Solo Rotface 10 man HC 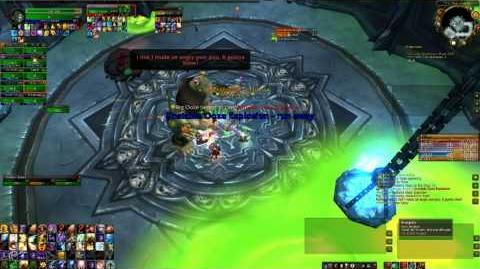 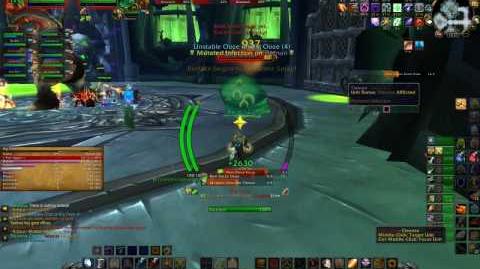 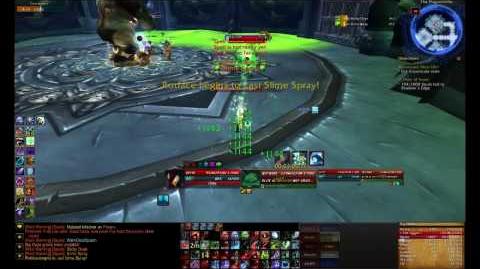 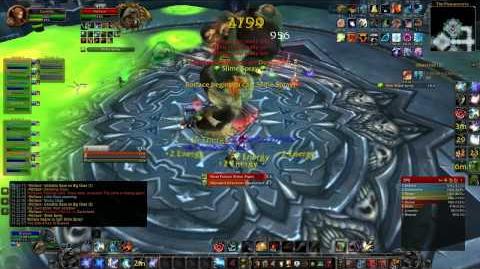 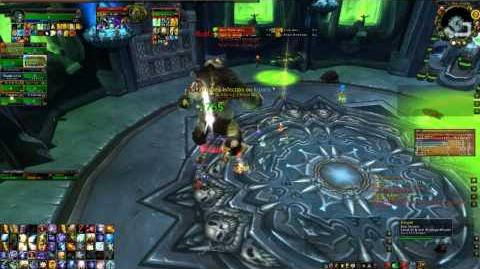 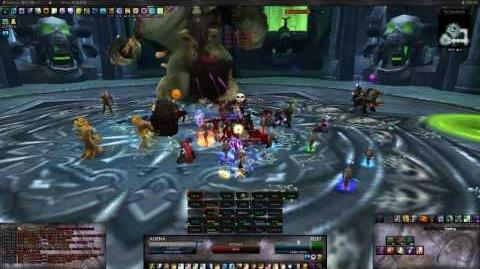 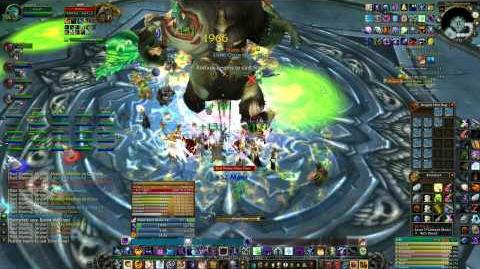 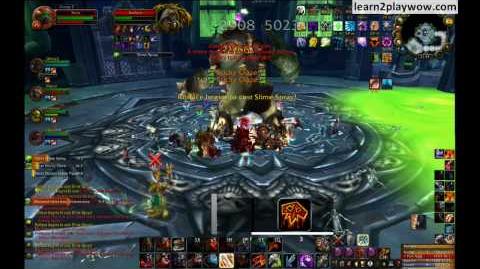 How to Guide Rotface Tactics - love2playwow.com 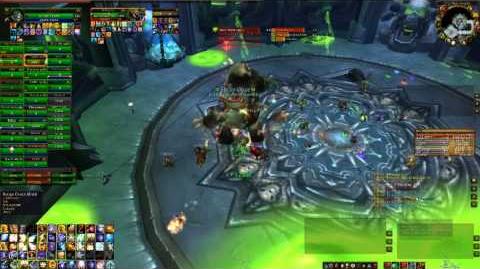 Icecrown Citadel: The Frozen Throne |  Blizzard Entertainment
The Plagueworks contains the most twisted experiments ever produced by the Scourge. In this wing players will face two new forms of abomination in Festergut and Rotface, who currently protect their devious creator, Professor Putricide.

See this subject on the Hearthstone wiki: Rotface

TauntMaster Easy to remember, easy to repeat strategy for Rotface.
Retrieved from "https://wowwiki.fandom.com/wiki/Rotface?oldid=2858023"
Community content is available under CC-BY-SA unless otherwise noted.