Rivett Clutchpop is a goblin engineer that accompanied the Horde forces into the Jade Forest aboard Hellscream's Fist. He is among a small group of survivors that must be located within Honeydew Glade. Afterward, he also serves as a quest giver at Strongarm Airstrip. 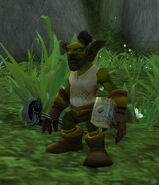 Rivvett after the wreck of the Sky Shark 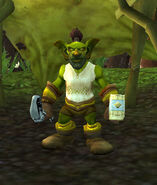 Rivett at Hellscream's Fist when it was originally a subzone.
Add a image to this gallery