The Retaking of Andorhal is a battle that was named so by Maddox as he was overconfident in his chances he would retake the city. However, the Scourge was victorious and the entire army was destroyed.[1]

Around the time of The Burning Crusade, a nobleman called Maddox decided to retake Andorhal for his own ambitions. His father was a rich man, and so, using his wealth, he hired a mercenary army to attempt to retake Andorhal.[1]

Maddox managed to convince the Argent Dawn to help him in his battle, recruiting the entire Chillwind Camp, and hiring hundreds of mercenaries. The army was to rendezvous in Chillwind.[1]

Arif, Ciarin and Lelior joined Maddox for unknown reasons but Thorn joined because he wanted to free the land of the Scourge. Maddox had the bad luck of eating Arakkoa Eggs that resulted to be rotten and was late for the meeting. During his journey to Chillwind Camp, he meet with a farmer called Halsand, who knew the land very well and decided to help Maddox.[1]

Finally the party arrived to Chillwind Camp but instead of finding an army of hundreds of soldiers, they just found around one hundred men ready to abort the mission.[1]

Argent Officer Pureheart was convinced that they would be slaughtered if they attacked but she was convinced as Halsand told her that he knew the land and could make a strategy to defeat the Scourge. Maddox then decided to pay triple to all the men that went with him.[1]

Halsand drew a map of the city and Maddox decided to split the army in two, one led by himself, Lelior and Thorn and the other led by another person.[1]

The Scourge army hid in the buildings and in the water, awaiting for the army of Maddox. Unaware, the army entered the city with no difficulty and arrived to the middle point where the other half of the army was supposed to meet. However, a suspicious Arif illuminated a house, revealing it was full of ghouls who attacked. Other undead reinforcements emerged from the water and buildings.[1]

Thorn ordered his troops to form ranks and thus the battle began, as the two armies fought, Ciarin was killed. Within a while, the entire Argent Dawn force from Chillwind had been destroyed, with only a few mercenaries surviving.[1]

Meanwhile the other half of the army was slaughtered by Abominations and other undead troops. When Maddox believed that he had the battle won, he came under attack. They destroyed what was left of the army and killed Lelior. Helsand was wounded while the rest of the army, including Arif, were slaughtered. Thorn and Maddox tried to flee, taking Helsand before they left.[1]

In their attempt to escape Thorn and Maddox were slain by Skeletons. Helsand ignored them and continued as the only survivor but when he was crossing the bridge to leave, a skeleton knocked him off of his horse, while a ghoul attacked him.

He stuck his pipe in the eye of the ghoul and managed to run, but it was too late as he had drunk water contaminated with the Plague of Undeath. Helsand transformed into a ghoul but was later killed by his son.[1] 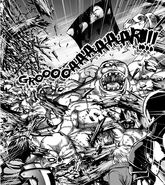 Abominations, the ones that crushed Maddox's army.
Add a image to this gallery

Retrieved from "https://wowwiki.fandom.com/wiki/Retaking_of_Andorhal?oldid=2730896"
Community content is available under CC-BY-SA unless otherwise noted.