The term "red dragon" may refer to a member of the species regardless of age, or more specificly in place of "mature" to describe the adult phase of a red dragon's lifecycle, between adolescence and becoming a wyrm. They are 100-500 years old.[1] (MoM 38) Red dragons are associated with fire.

A red dragon from Manual of Monsters. 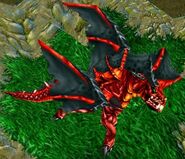 Retrieved from "https://wowwiki.fandom.com/wiki/Red_dragon?oldid=2087815"
Community content is available under CC-BY-SA unless otherwise noted.