Start a Wiki
watch 02:04
'World of Warcraft' Recruit A Friend Tutorial
Do you like this video?

The Recruit-A-Friend program is a referral system, through which players can recruit friends or family members into World of Warcraft.

How to recruit a friend

) in the upper-right corner.[1] When a player chooses to recruit someone, the recruit is emailed an invitation that is valid for 7 days after the invite was sent.[1] Once the invitation is activated, both accounts will be "linked" for up to 90 days from when the recruit's account was created,[1] so it is best for an recruit to create an account when the invite is received rather than some time before.

Prior to World of Warcraft Starter Edition

.
Log into Account Management and click on the "Recruit-A-Friend" button. This loads the referral page where a player can enter a friend's name and email address and a custom message. When a player chooses to recruit someone, the recruit is emailed an activation key for a 10-day trial account. Accounts created through this referral become "linked" with the recruiter's account for 90 days.[2] If the trial account is upgraded to a paid subscription, both the recruiter and the recruit gain benefits when they play World of Warcraft together. The latest version of this service was made available on November 12, 2013 (circa

Lasts for 90 days after the recruitment

Refer-A-Friend Rocket Mount Update | 2010-04-26 13:18 | Zarhym
Time is running out for those who wish to claim their Zhevra, as the launch of the X-53 Touring Rocket is now scheduled for tomorrow, Tuesday, April 27! If you’ve fulfilled all of the Recruit-A-Friend requirements necessary to claim a mount now but choose not to claim the Zhevra, you will be able to claim the X-53 Touring Rocket instead once it launches. Sounds like they’re firing it up for a final test run now....

You can find the original announcement here: http://forums.worldofwarcraft.com/thread.html?topicId=24038460723&sid=1

New Recruit-A-Friend Mount Coming Soon | 2010-04-06 09:00 | Bashiok
Beginning in just a few days, players who participate in the Recruit-A-Friend program will receive a whole new reward for showing a friend the ropes in Azeroth: the X-53 Touring Rocket, a two-seater flying mount that automatically increases its speed as your mount skill improves (up to 310% speed if you already have a 310% mount). The X-53 will be replacing the current Zhevra mount reward, which is retiring from the Recruit-A-Friend business after a good run. If you've already claimed a Zhevra (or claim one prior to the change), you’ll be able to hang on to it, of course. We’ll have more details on the new Recruit-A-Friend mount once it becomes available.

With the new Recruit-A-Friend program, you can earn an exclusive Zhevra mount, receive a FREE month of game time, and gain access to other exciting in-game benefits. From the moment your friend creates a character and starts playing, you'll both earn triple the experience when grouped together and have the ability to summon one another from anywhere in the world. Also, for every two levels of experience your friend earns, they can grant one level of experience to one of your lower-level characters. 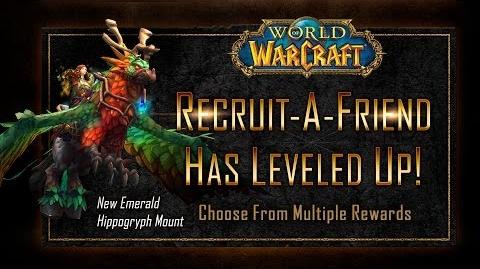 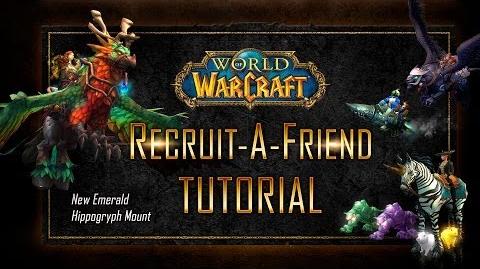 Getting friends to play

(Yahoo) AssociatedContent.com How to Get Your Girlfriend or Wife to Play WoW: 6 Simple Steps to Getting Your Woman to Play World of Warcraft by Sara Sellers, Sep 21, 2010