Razorgore the Untamed is a black dragonflight dragonspawn and the first boss of Blackwing Lair.

The very first thing you will see when you enter Blackwing Lair is the Egg Chamber. To progress beyond this room, you must first defeat Razorgore.

The raid should be well equipped with MC gear at least. The main damage from Razorgore is fire damage, thus the tanks should balance their gear well - they do need some FR (but not all-out FR gear, because this impairs their ability to kite). Other raid members can also benefit from FR gear (esp. those dealing with the mages), but nobody should gimp himself too much just for FR.

This encounter consists of three phases: During Phase 1 the orcish orb controller, Grethok the Controller, and his two guards are dealt with. On the pull a timer starts, at the end of which adds will start to spawn (phase 2). If the controller and his guards are dead before the timer expires, the raid will have a short phase out of combat at the end of phase 1. The Orb of Domination should be used right away to control Razorgore, else he will attack the raid. The controlled Razorgore is used to destroy all the eggs in the room.

In Phase 2, adds spawn in the rooms corners until 40 orcs (melee and mage types combined) and 12 dragonkin are there. If some adds are killed, new ones will spawn to replace them. This phase ends when all the eggs in the room are destroyed, at that point all adds despawn and Razorgore is reset to full health. If Razorgore reaches 0 hp before all of the eggs are destroyed, he will unleash a massive AoE that instantly kills the entire raid, and resets the room.

The objective of Phase 3 is to kill Razorgore. Hopefully enough of the raid survived phase 2 to bring him down...

This is a quick and dirty fight. Aggroing this mob also aggroes Razorgore, so this phase needs to be completed as quickly as possible. The controller has a mind control ability, so kill him first. CCing his guards is not a good idea because it takes too much time; better tank them, some raids even use AoE. The faster these three are dead the better. When this is done, have someone take control of the controlling orb.

The following general strategy works best for raids while learning this encounter. There are variations possible (like using fear, or Razorgore's firebolt cluster), but the general idea mostly remains the same.

In the room corners are two spawn points each (the little "rooms" which are lower than the normal floor). From these points, up to 52 adds spawn rather quickly, but randomly. The types of adds and how they should be dealt with are:

All adds have initial aggro on the Razorgore controller. The mage types will run to the center of the room and start to attack the controller with their ranged fireballs - this must not happen.

Since the number of adds is limited (12 dragonkin and 40 orcs), killing only the mages will eventually lead to a room full of melee orcs and dragonkin.

It's a good idea to set up at least one 5 man group (consisting of rogue, mages and warlocks) to watch each corner and kill the mages spawning there. It helps to set up a rogue as main tank in CTRaidAssist for each of these corner groups.

When controlled, Razorgore has the following abilities:

It is a good idea to have the MT or at least some "hard" class (warrior, paladin or feral/guardian druid) control him, because Razorgore will have an infinite amount of aggro on his former controller in Phase 3. Controlling Razorgore is a channeled effect which regularly wears off after 90 seconds. The "destroy egg" ability has a cooldown of 10 sec, so 9 eggs can be destroyed each control period. Beyond this, Razorgore has a fire ball volley, and the ability to sleep dragonkin.

It can help to position Razorgore away from the orb near the end of the control periods, so he cannot immediately attack the controller. Do not double-click the orb. If you do that you will get the mind exhaustion debuff which means that you can't control him and someone else will need to take over. The boss will be loose while this happens and that's bad. If you want to end a control period early, the /dance emote is an appropriate method.

If the sleep dragonkin ability is to be used, a dedicated assist for this purpose should be set up. This person keeps a lookout for loose dragonkin, and targets them. The Razorgore controller can then assist and sleep while waiting for the destroy egg cooldown. There appears to be no cap on the number of dragons he can sleep, so a skilled controller can take as many as four dragonkin out of the fight.

If Razorgore dies before this phase is complete, he will produce a large death explosion which will kill everything in the room. This explosion goes through Divine Shield and Ice Block and is not prevented by Ardent Defender.

All healing classes should be used to heal because healing aggro is the reason for most wipes here. Since it is impossible to establish solid aggro on 52 mobs, healers must be extremely cautious. In order to distribute healing aggro as much as possible, use shield all the time, and ranked-down heals (and healing stream totems if available), and take care to heal as many different targets as possible. Wipes usually happen because some healer draws healing aggro and gets killed, then the other healers have to heal more, and get aggro in turn. Alternatively, the wipe happens when a kiter dies (because he didn't get healed enough), and his train then turns on the healers.

Avoid the use of HoTs; they produce more aggro than a direct heal. Power Word: Shield though *does* create only about 60% of the aggro of an equivalent heal, thus priests should pay attention that all kiters are shielded as much as possible.

When kiting the adds, it is important to gain a speed advantage over them. Hunters have their speed increase buff, while warriors have an AoE slowdown debuff. Dragonkin are immune to the latter, they also ignore the effect of stoneclaw totem. Thus if warriors kite dragonkin, they should use the platforms and stairs to gain a speed advantage. The trick is to jump off the platforms, because the mobs will not jump, but instead run down the nearest ramp. The kiter should then run across the room up the opposite ramp, wait on the platform, and jump off when the chase is within 5-10 yards. The pause is important because if they run too fast, the mobs will not run up the platform but instead take the shortcut. Next run back to first ramp, run up, and repeat - this leads to a "figure 8" pattern. During this whole time the kiter should be spamming demoralizing shout (or use scatter shot) to hold aggro. If done properly, the kiters take only little damage during this. Boots enchanted with the +speed enchant help a lot.

If one kiter has both mob types (dragonkin and legionnaires) in his train, slowdown effects are not a good idea, because the Dragonkin are immune, while the orcs are not, resulting in a splitting train.

It is possible to kite Razorgore. With his fireball volley, he can easily hold aggro on the whole room. The problem is to keep him alive, esp. the melee orcs do quadruple damage on dragons. The raid must concentrate on freezing, fearing and sleeping most of the mobs, while the healers keep Razorgore up.

If Razor takes too much damage, release control. In that case, the aggro is transferred from Razor to his former controller, who now can start to kite the whole room (while somebody else takes control and continues to destroy the eggs). Pay attention not to break the train in this case (avoid using fear, and don't heal).

Razorgore alone isn't very strong and it is possible to win with two surviving tanks, 4 healers, and a few DPS, though it is obviously preferable to have more. The only difficulty is to manage his aggro, like all dragons he's immune to taunt. Fortunately his former controller is fixed on the top of his aggro list (until the former controller dies).

Razorgore has a Conflagration spell which he sometimes uses against his current target, which disorients the target for some time. While that confusion lasts, Razorgore attacks the next highest target on his hate list. After the effect wears off, he returns to his normal hate list mechanics, so if the confused person was the former controller, Razorgore will always return to him.

The usual method to deal with this is to have at least two tanks, positioned far enough apart not to be hit by the conflagration at the same time.

Since the conflagration is an AoE effect, the main damage should be ranged (similarly to the Onyxian Warder encounters). Rogues should bandage the range DPSers at this time, as well as help with their bows.

Death (before all of the eggs have been destroyed) 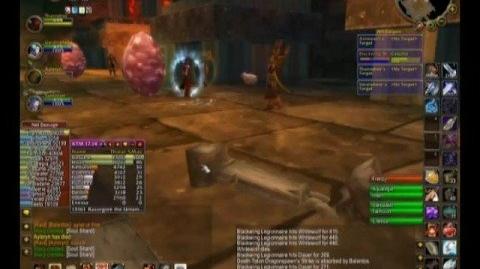 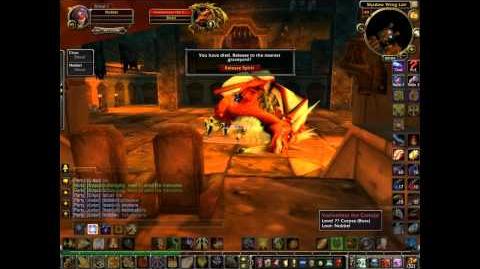 Bugs and other known effects

Retrieved from "https://wowwiki.fandom.com/wiki/Razorgore_the_Untamed?oldid=2856102"
Community content is available under CC-BY-SA unless otherwise noted.