Razorfen Downs are the ancestral burial grounds of the quilboar, nestled amid huge brambles that spread from the north of Thousand Needles, into a small section to the south of Southern Barrens (where they are called Razorfen Kraul) and partially into Mulgore. The Scourge have taken over much of the downs, and infest the burial grounds with the reawakened dead. The enemy level range is 40-50. It is also known as RFD, not to be confused with RFK or BFD.

The instance entrance itself lies in the depths of the bramble overgrowth in northern Thousand Needles[47, 23] though without a flying mount, it is accessed via the skull of what seems to be a huge quilboar near the meeting stone,[53, 25] rumoured to be the corpse of Agamaggan from which the brambles supposedly sprang.

Crafted from the same mighty vines as Razorfen Kraul, Razorfen Downs is the traditional capital city of the quilboar race. The sprawling, thorn-ridden labyrinth houses a veritable army of loyal quilboar as well as their high priests - the Death's Head tribe. Recently, however, a looming shadow has fallen over the crude den. Agents of the undead Scourge - led by the lich, Amnennar the Coldbringer - have taken control over the quilboar race and turned the maze of thorns into a bastion of undead might. Now the quilboar fight a desperate battle to reclaim their beloved city before Amnennar spreads his control across the Barrens.

Razorfen Downs and its environs were added to Thousand Needles in Cataclysm; as such, a rear entrance from Thousand Needles was added roughly northeast of Darkcloud Pinnacle. It also had its level range increased to 40-50.

Razorfen Downs has a more menacing atmosphere than many lower level instances before it due to the presence of the Scourge. Loot here is valuable and useful but you can expect a workout in order to get it. If you are between levels 40-50, have a group of people you trust, a couple hours or so to spare and are looking for a more intense fight than what you will normally experience below level 50, chances are you will enjoy this instance.

As a result of being taken over by the Scourge, the mobs populating Razorfen Downs are predominantly undead. The priest ability Shackle Undead shines here as a staple form of crowd control. The earlier quilboar mob groups usually consist of one humanoid caster (Geomancer or Necromancer) and several undead tanks (Withered Warriors and Reavers). Another strategy is to have the priest Mind Control the Death's Head Necromancer and use the mob's version of Shackle Undead against the nearby undead tanks just before the caster dies. The group only needs to worry about interrupting the Mind Control battle.

Also of note are the various patrols of weak skeletons and non-elite mobs in the Spiral of Thorns. These can easily be taken care of with AoE. Be sure to communicate your intent with the group when pulling mobs and shield your AoEers appropriately.

In Tuten'kash's chamber, or "the gong room," there are mobs straight ahead to the right and left. The sharp angle of the left wall may obscure your vision of these mobs, so either scout ahead or remember to tackle this left mob group first. Pulling the right mob group without handling the left may result in adds and eventually a wipe.

Deeper into the dungeon (the Spiral of Thorns), the mobs change to a banshee and skeleton type. The banshees are casters with silence, so plan your anti-caster attack accordingly. Further in still are skeletal summoners who, if allowed to cast, will summon non-elite shadowcasters to attack you.

Close to the entrance of the Spiral of Thorns, you may come across what looks like a passable shortcut, but is not.

It is possible to take the right fork (toward the banshee/skeleton types) and deal with that side first before heading for the left fork and the quilboar types. This means you will fight Glutton first followed by Amnennar the Coldbringer, which may be desirable if time is a significant factor. 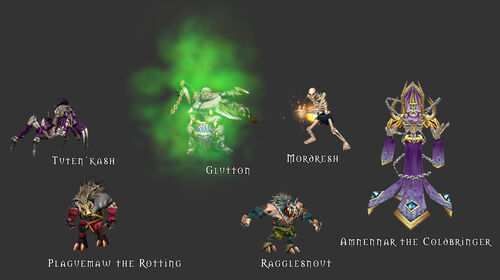 Retrieved from "https://wowwiki.fandom.com/wiki/Razorfen_Downs?oldid=2834513"
Community content is available under CC-BY-SA unless otherwise noted.