Overseer of demonic activity in the Blasted Lands

Razelikh the Defiler (a.k.a Rakh'likh) is a level 60 elite named dreadlord and demonic overlord of the Blasted Lands.

Besides being served by the death knight Ilifar and Felcular, Razelikh is protected by a triad composed by Grol the Destroyer, Lady Sevine, and Archmage Allistarj. In exchange for their servitude, Razelikh granted each of them nearly unlimited power within the Blasted Lands. Each of Razelikh's underlings wears a third of an amulet of Razelikh's creation around their neck. The very same amulet is needed in order to summon the arch demon. The amulet pieces are each attuned to the lifeforce of their owner, granting them immortality. As long as they remain within the Blasted Lands, they cannot be slain, their life spans extended until the end of days.

There is only one way to harm the demon lord and his minions. A weapon of power must be forged bearing his true name: Rakh'likh. When such a weapon is forged, the demon and all under his command are vulnerable.

Razelikh's lair is atop the highest mountain in the Blasted Lands: the Rise of the Defiler. The only way to reach his lair is through the use of the teleport runes near the base of the mountain. Only by holding the amulet can one be transported to the peak.

The quest chain to summon and kill Razelikh/Rakh'likh is one of the longest and most convoluted in the game, taking players from the Blasted Lands to Azshara and Stranglethorn Vale before returning them to the Blasted Lands for the final battle.

Knockback at 50%
Razelikh the Defiler yells: Let the flames of chaos engulf you!

Death
Razelikh the Defiler yells: Prepare yourselves for an eternity of anguish and torture - vengeance shall be mine...

He's immune to all debuffs/stuns, to all paladin judgements, warlocks DoTs (all curses, corruption), banish, fear, and also shadow and fire damage. The debuffs from the Enchanted Azsharite Felbane weapons don't appear to affect him, just his minions.

During combat, Rakh'likh summons one of his minions, a Death Knight, then later his champion, a felguard. Between the two, he will do a powerful knockback which have the nasty habit of knocking the tank off the mountain. It has a five-second cast, so run away while he's charging up. If not, a quick charge can save your life. Pets are immune to the knockback, but a tank must prepare. Either the full length of the plateau (so the tank lands still on the plateau), or where there is a solid wall behind him to stop the flight. There are two common strategies to avoid him knocking the tank off the mountain which occurs at 50% health.(In addition to potentially wiping the group, can cause the tank to miss being able to loot the Severed Horn of the Defiler if he gets knocked far enough away).

First, there is a ledge below the top with the "Rune of Return" on it(It teleports you to [0, 0]. If you can pull Razelikh to that ledge, the tank can place his back against the wall, negating the knockback.

Secondly, when Razelikh is about to perform his knockback, he shout "Let the flames of chaos engulf you!". At this point, all melee can simply run out of range of the channeled knockback and avoid it completely.

Exactly how a relatively mid-level Dreadlord was granted the same title as the insidious Archimonde is unknown. It is possible such a title is simply relative and not reflective of rank or level of power when compared to another with the same title (Ragnaros the Firelord vs Cyrukh the Firelord, Kil'Jaeden the Deceiver vs. Kalaran the Deceiver). 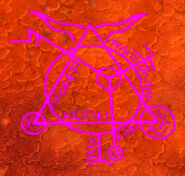 Rune of the Defiler. 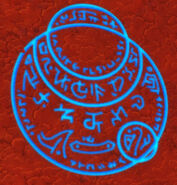 Rune of Return.
Add a image to this gallery

Retrieved from "https://wowwiki.fandom.com/wiki/Razelikh_the_Defiler?oldid=2754132"
Community content is available under CC-BY-SA unless otherwise noted.