Were you looking for Rated battlegrounds?

Rated PvP is a subset of PvP battle where a player can get a PvP Rating. The types of PvP battles that affect your PvP Rating are Rated battlegrounds (10v10) and 2v2/3v3 Arenas. Rated PvP was introduced in 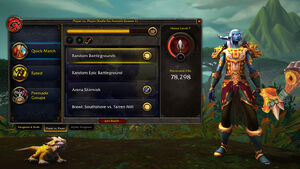 Battle for Azeroth offers increased clarity and a more structured progression that recognizes players’ accomplishments in real time as they climb through the ranks. As players reach the following rating thresholds, they will enter formal brackets:

Regional tracking is available for those who have reached Gladiator, enabling them to see where they rank in their region right within the interface. The specific rewards available in each of these brackets which will be clearly shown in the game’s interface so players can work their way toward earning the items they want most. 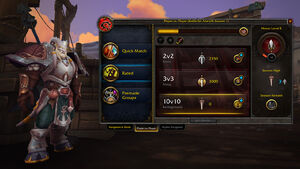 Conquest points are returning as a measure of Rated PvP activity; players also receive a specific piece of raid-quality gear each week, adding up to full sets of increasing quality over the course of a season. This will make it so players have better visibility into how much time and effort they’ll need to put into earning a specific item and will counterbalance the random nature of rewards elsewhere in the system.

The end-of-the week rewards run along the lines of the weekly Grand Challenger’s Bounty chests players can earn for doing Mythic Keystone dungeons. These weekly rewards can be collected from a chest in the Dueler's Guild PvP hub in either Zuldazar (Horde) or Boralus (Alliance).

If players have filled up their Conquest bar for the week, they’ll receive a reward in the chest of an appropriate item level. The item level of the reward will be based on the highest bracket in which they won at least one game last week. For example, if they played and won at Duelist in 3v3, expect to receive a reward with an appropriate item level for that ranking at the end of the week. However, if they were rated as a Duelist in 3v3, but only participated in 2v2, they wouldn’t receive a Duelist level item unless they had won a game in 3v3.