King of the Zandalari Empire

King Rastakhan (pronounced "RAH-stuh-kawn")[2] is the ruler of the Zandalari Empire. He was blessed by the loa Rezan with a long life, swift healing, and strength beyond most trolls.[3]

King Rastakhan rests on a golden throne, lording over all of the Zandalari. Empowered by the Zandalari gods themselves to act as their voice, he has ruled over two hundred years. King Rastakhan is consulted before every battle or major decision by the Zanchuli Council, which both advises the King and ensures his every command is executed.[4]

Rastakhan prefers that his opponents–some of which hail from the Zanchuli Council–are not able to get their hands on information meant for his ears. And while they underestimate him, his cleverness has resulted in him creating a special code that only he himself and his closest bodyguards, Zolani and her brother Habutu, understand.[5]

Forty-six assassination attempts have been made on his life, whereof the latest assassin had also been his wife.[6]

When the word of Hakkar the Soulflayer's presence in Zul'Gurub reached the Zandalar tribe in the South Seas King Rastakhan sent emissaries to Yojamba Isle. There the trolls recruited champions from Azeroth's many races to defeat Hakkar.[7]

Years ago Zul warned King Rastakhan of a terrible Cataclysm. For Zul had seen a vision of a great armored dragon clenching the world in his ferocious jaws. Months later Zul returned, bearing more grim news from his visions. Still, King Rastakhan did nothing. Finally, mere months before the Cataclysm, Zul returned. He described the golden capital of Zandalar slowly sinking beneath the waves in the aftermath of the Cataclysm, its once-great people drowning as their mighty works slipped forever beneath the sea.[8] Zul advised the council and King Rastakhan to unite with the other troll tribes and to abandon their doomed homeland. Despite Zul's infamy, the council refused to believe in the scope of the disaster to come. Many felt that Zul was grandstanding to increase his own status and power.[9] King Rastakhan grew tired of Zul and his troubling nightmares. To be rid of the prophet, he granted Zul the use of his largest ships, so that he and his followers could seek a new land if his visions came to pass.[8] They scoffed as he and his followers began assembling a war fleet and reaching out to the lesser troll races.[9]

But Zul's vision were visions of the truth. Deathwing's Cataclysm rocked Zandalar to its foundation. The spine of the land broke in two, and soon, the city and all its riches began to slide into the hungry sea. The Zandalari people turned to their King for help, but there was only one Zandalari equipped to help them: the prophet Zul. Even now the mighty and enigmatic troll empire slides into the sea, and Zandalari peasants and warriors alike flock to Zul for guidance on what to do next.[9] Led by Zul, the Zandalari have issued a call to Azeroth's embattled troll populations: unite into a single mighty empire and save their race from extinction.[10] Meanwhile Rastakhan is still sitting on his throne in Zandalar as the island sinks around him.[11]

Rastakhan's empire was sinking into the sea, and Zul had a way out - Rastakhan supported the Zandalari's efforts to make a new troll empire.[12] Vol'jin has said that it was Rastakhan's plan to unite the troll tribes.[13]

Rastakhan appears on Zandalar as the Horde comes to ask for the Zandalari's naval forces in their renewed war with the Alliance. Zuldazar faces a civil war between his followers and Zul's followers.

While General Jakra'zet of the Zanchuli Council is disgusted by the Horde presence on Zandalar, Rastakhan allows them to stay because they saved his daughter Talanji from the Stormwind Stockades. He names a Horde adventurer the Speaker of the Horde.[14]

Before his debut in Battle for Azeroth, Rastakhan had been mentioned as far back as the original World of Warcraft.

He is mentioned indirectly in the titles of a few Zandalari trolls:

He is also mentioned by some of these trolls. Ghaliri greeted the Alliance adventurer in Rastakhan's name. He also said he was waiting for Rastakhan's message to strike against Zul'Gurub.[15]

In the RPG Edit

King Rastakhan is king of all trolls on Azeroth. He is an ancient and formidable witch doctor and keeper of troll lore. He is ancient and hoary, but his wire-hard muscles speak to his strength. A string of shrunken heads hangs from his neck, and a humanoid skull is impaled on his spear. He rules from Zuldazar on the island of Zandalar. While he technically is the king of all trolls throughout the world, it is not an entirely accurate description. This is because trolls often have trouble working with each other, despite conferences on Zandalar.[16] King Rastakhan is strong, wise, insightful, cunning and visionary. He is a big part of the reason that Zandalar's influence is again felt in the world, as he is instrumental in organizing the 6-year troll conferences and in sending representatives to work against Hakkar. Most other trolls respect him as a powerful and wise leader. Numerous loyal priests and witch doctors assist Rastakhan, and he shows his wisdom in which advice he heeds and which he ignores. Rastakhan is a patient but decisive ruler.[17]

Rastakhan, as king of all Azeroth's trolls, rarely enters combat when not accompanied by a host of barbarians, warriors, shamans, witch doctors and other support. He prefers to remain out of melee, decimating his foes from a distance with his spells. If he has time to prepare before battle, he doles out potions and alchemical concoctions to his elite: brews to increase their defenses and combat efficiency.[16]

While he is the leader of the Zandalari trolls, it appears he is only a jungle troll.[16][17]

Vision of Rastakhan in Mists of Pandaria 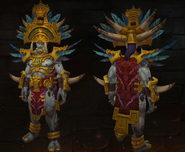 Rastakhan in Battle for Azeroth, shown at BlizzCon 2017
Add a image to this gallery

Retrieved from "https://wowwiki.fandom.com/wiki/Rastakhan?oldid=2857670"
Community content is available under CC-BY-SA unless otherwise noted.