For strategy on the encounters in the Molten Core and the Firelands, see

Ragnaros the Firelord is an incredibly powerful Elemental Lord and master of all fire elementals. He once ruled over his minions from deep inside the fiery core of Blackrock Mountain. In the Molten Core instance; It is possible for two handed mace wielders to obtain a mortal-sized copy of his weapon, [Sulfuras, Hand of Ragnaros]. He now rules from the Firelands plotting to engulf Azeroth in flame.

Ragnaros is voiced by Chris Metzen.[2]

Ragnaros appears in World of Warcraft as the final encounter in Molten Core and also in Mount Hyjal during a quest.

The Firelord and his brethren once held sway over the entire world. As a servant of the Old Gods, he fought against the Titans for domination over the planet. The victorious Titans banished him and his brethren to the Elemental Plane — there to remain imprisoned until the end of time. It was then and there that the brothers turned on each other. For five millennia a battle was fought at the core of this world. It was during the Elemental Sundering that Ragnaros attacked Thunderaan, Prince of Air. Thunderaan was utterly defeated and the Firelord feasted upon his essence, but was unable to consume him entirely. Ragnaros divided what remained between his servants, Baron Geddon and Garr.

Around three hundred years ago the ambitious and ruthless Dark Iron clan initiated a war against their dwarven brethren, the Bronzebeard clan and Wildhammer clan, thinking that they were about to unite against the Dark Irons. During this War of the Three Hammers, the Dark Iron dwarf leader named Thaurissan lay siege to the Bronzebeard's capital city of Ironforge, while his wife Modgud attacked the Wildhammer capital of Grim Batol. Modgud was succesful in her assault upon the Wildhammer dwarves, but Thaurissan proved less succesful. The Bronzebeard dwarves repelled his attack and quickly dispatched aid to the Wildhammer dwarves. In a short time, the Dark Irons' fortunes took a turn for the worse, and they were pushed back to the city of Thaurissan, the Dark Iron dwarven home. Thaurissan, seeking to summon a supernatural minion that would turn the tide of the war back to his favor, called upon the ancient powers sleeping beneath the world. To Thaurissan's surprise, and ultimately his doom, the creature that emerged was more terrible than any nightmare he could have imagined.

Now, freed by Thaurissan's call, Ragnaros erupted into being once again. Ragnaros' apocalyptic rebirth into Azeroth shattered the Redridge Mountains and created a raging volcano at the center of the devastation. The volcano, known as Blackrock Mountain, was bordered by what is now known as the Searing Gorge, to the north, and the Burning Steppes, to the south. Though Thaurissan was killed by the forces he had unleashed, his surviving Dark Iron clan brethren were ultimately enslaved by Ragnaros and his elementals. Many Dark Iron dwarves remain within the lower areas of the mountain, especially Blackrock Depths, toiling away at the behest of Ragnaros and the Firelord's lieutenants. They worship Ragnaros, considering him not only a Elemental Lord but also an Old God,[3] (LoC 191-192) although he is only affiliated with the Old Gods. The Bronzebeards and Wildhammers, however, remain free.

Witnessing the horrific devastation and the fires spreading across the southern mountains, the Bronzebeards' King Madoran and Wildhammers' King Khardros halted their armies and hastily turned back towards their kingdoms, unwilling to face the awesome wrath of Ragnaros. Now he lies at the bottom of that volcano on Azeroth, striving to find a way home, as well as to gather his strength once again so he can burn away Azeroth and take it for his own. Meanwhile, in Sulfuron Keep and elsewhere across the Firelands, his elemental princes battle constantly for dominance. He and his dwarven minions took control of the Blackrock mountain's volcanic depths and made war on the orcs in the Upper Blackrock Spire, which served as the seat of power for Nefarian the black dragon. Ragnaros has uncovered the secret to creating life from stone and plans to build an army of unstoppable golems to aid him in conquering the whole of Blackrock Mountain.

After being defeated in Molten Core, Ragnaros was banished back to the Elemental Plane. He is now located in Sulfuron Keep, his seat of power within the Firelands. He and his armies will be launching a full scale assault on Mount Hyjal, attempting to burn the now-regrowing World Tree. It seems that he has allied with Deathwing, therefore ending his war against Nefarian's forces, and uniting them as a single army. He would be one of two Elemental Lords allied with Deathwing, the other being Al'Akir. His assault on World Tree is run by several of his lieutenants (notably Baron Geddon) assisted by troops of the Twilight's Hammer clan and various members of Twilight dragonflight. According to a series of quests in Mount Hyjal, the assault of Ragnaros was repulsed with the help of some recently revived Eternals and Guardians of Hyjal.

He makes an appearance during the quest

[82] The Firelord in Mount Hyjal. He will make another appearance in Patch 4.2.0 as the final boss of the Firelands outdoor raid.

Within the Inner Spire

The Midsummer Fire Festival involves festivities including a "rebirth" of player activities involving Ragnaros. During the Festival, there is a number of references to Ragnaros the Fire Lord including a Summer Scorchling that, when given an incense, grows in size until he "jokes" about becoming the Herald of the Fire Lord and showing new players a slight glimpse of Ragnaros himself.

During the Midsummer Fire Festival, high level players can face the true threat facing the world. The Earthen Ring send adventurers across the globe on a quest to save the world from an Elemental War. The Twilight's Hammer plans to summon the Frost Lord into the world so that he may face Ragnaros bringing an elemental war to the world once again. Players are then sent to Slave Pens to face

Ahune and defeat him before he may gain full strength and begin his attack on the Fire Lord.

It is revealed part of Ragnaros' power was absorbed by Shotoa which gives him power to command elemental spirit, mainly the spirit of fire.[citation needed]

Ragnaros is fought as the final boss of the Firelands raid instance. On normal difficulty, he retreats when his health hits 10%, but on heroic difficulty, players must bring down his health to zero in order to defeat him. There's been some debate about whether Ragnaros actually dies when players complete the heroic mode encounter. During the quest

[82] The Firelord, Hamuul Runetotem claimed that if Ragnaros were to be defeated in his own realm (the Firelands), he would be forever vanquished. If Hamuul's words hold true, Ragnaros may be permanently killed lore-wise.

"Text #9426 - BY FIRE BE PURGED!" was datamined from files within the WoD beta, sparking rumors of the Firelord's likely return in some way or the other. However, this was eventually revealed to instead be from the revamped version of the Molten Core raid for World of Warcraft's 10th anniversary. 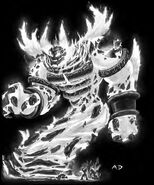 Ragnaros in the Firelands

Rangaros the Firelord, legendary card in Hearthstone
Add a image to this gallery 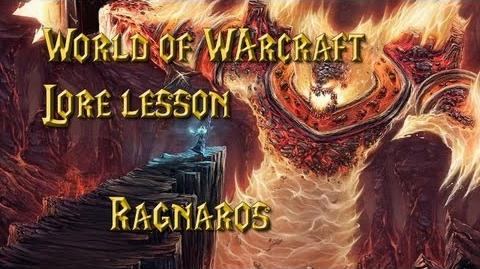 Retrieved from "https://wowwiki.fandom.com/wiki/Ragnaros?oldid=2861417"
Community content is available under CC-BY-SA unless otherwise noted.