For the Alliance version of this quest, see Quest:What Now? (Alliance).

You may return the crate to either Edgar Goodwin at the Broken Tusk[53.6, 78.8] in Orgrimmar's Valley of Strength.

Return the crate to Delian Sunshade at the Wyvern's Tail[76, 49.2] in Orgrimmar's Valley of Honor.

You've finally found the crate that Edgar Goodwin sent you to retrieve. However, it appears the Reliquary representative's warnings about the nature of the crate's contents were correct.

There's no doubt that your employer lied to you about the dangers involved in the job. Do you really want to hand the crate over to him, or would you rather give it to Delian Sunshade, who believes it better to keep the crate's contents locked away?

If turning in to Delian:

Delian Sunshade says: You must not think of this as a betrayal, <name>, but Mr. Goodwin has offered me the find of a lifetime in exchange for his belongings.

Edgar begins channeling his spell. He turns into a spider and runs around frantically!

Edgar Goodwin says: What's happening to me? It burns!

Delian Sunshade says: Perhaps Belloc and the Reliquary shall have both of these after all... 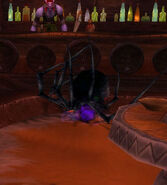 Goodwin's spell ends in disaster.
Add a image to this gallery

Retrieved from "https://wowwiki.fandom.com/wiki/Quest:What_Now%3F_(Horde)?oldid=2524268"
Community content is available under CC-BY-SA unless otherwise noted.