The Warchief Will be Pleased

Return to the Highlands 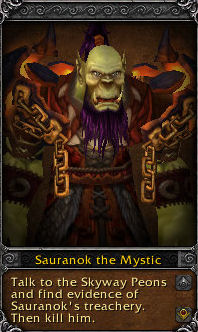 Question Orgrimmar Skyway Peons around the Zeppelin Towers. Look for any Suspicious Peons[43.8, 63.4]. Try to flush out Sauranok the Mystic and kill him.

I haven't given up my search for the Twilight's Hammer agents that lurk here in Orgrimmar. I need someone I can trust to collect the final evidence of treachery.

<Hellscream pulls you aside.>

Sauranok the Mystic - my own most trusted advisor! - is under suspicion. Uncover the truth, <name>, and you'll be rewarded.

I understand Twilight's Hammer has infiltrated workers at the airship docks, to spread their lies all over the continent. Question them. If you discover Sauranok's guilt... Kill him.

Sauranok, Sauranok. His own visions worked against him. Twilight's Hammer probably corrupted him from afar. Bah! Weak! We'll speak his name no more.

I told him you were investigating the airship docks, <name>. To flush him out. Yes, I used you as bait. You served your Horde well, and deserve a reward for outing this viper from our midst.

Players find the suspicious peon skulking in the shadows...

Has a secret cult infiltrated the Orgrimmar skyway?
Why ask me? I know nothing of the Twilight's Hammer.

I know all about your cult master.
The peon's eyes widen in terror.
No! You've discovered Sauranok is the new cult leader in Orgrimmar? He told me his secret is safe!

So it's true? Sauranok IS guilty of treason!

Sauranok arrives and slays the peon. Players now have to face off against him!

Retrieved from "https://wowwiki.fandom.com/wiki/Quest:Traitor%27s_Bait?oldid=2554041"
Community content is available under CC-BY-SA unless otherwise noted.