+325 Knights of the Ebon Blade

Vereth the Cunning at the Rise of Suffering has requested that you use a Lithe Stalker to scout out Malykriss.

We need to know what we're up against.

Use the eye of dominion to assume control of a lithe stalker and scout out the area. There are a few spots in particular I saw when flying in that I want you to get a closer look at: the overlook in the northeast, the work area in the southeast, the large forge near the center, and the ritual area in the southwest.

The stalker can leap far and won't be hurt by large falls - use that to your advantage to get up and down from those ramparts.

Flying may be a bit more graceful, but there's no way we could get in as close as the stalker without being detected.

He certainly is sparing nothing in his attempt to recreate Acherus. A pure Saronite citadel would be hard to destroy indeed. There's no need to destroy it though... we can halt production and put down those death knight leaders here and now, before they become a real threat.

More importantly, we need to disrupt them enough to get those death knights away from the leaders so we can make our strike.

The Lithe Stalker has the following abilities: #1 is Leap, 5-45 yard range, leaves combat, #2 is Iron Chain, which will attach a chain to a scourge bomb to drag it over to a Lumbering Atrocity, #3 is Heave, knocking targets away with bonus damage to gargoyles in stone form, #4 is Throw Rock, doing minor damage and distracting a target without drawing aggro.

All of Malykriss is neutral to the Lithe Stalker, so it's easy to explore the zone without aggroing any mobs. 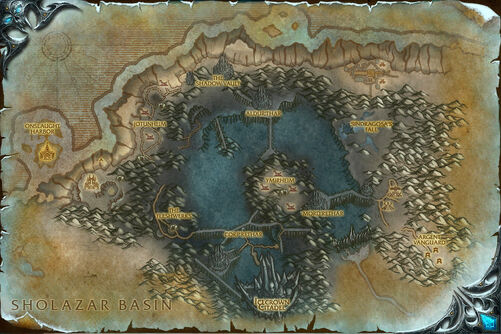 Retrieved from "https://wowwiki.fandom.com/wiki/Quest:The_Vile_Hold?oldid=2657837"
Community content is available under CC-BY-SA unless otherwise noted.