The Pit of Scales

A spot on the southern end of the map was marked with hieroglyphs of crocodiles fighting each other.

That must be where Caimas took Akhet.

Go to the Pit of Scales and find a way to rescue the Vizier's son.

I thank you for what you've done, <name>. You can count on my vote when High Council convenes.

Fly west across the mouth of the delta to reach the Pit of Scales at the other end of the delta. There is Tahet, in bad shape. Talk to him.

When he is eventually killed, Tahet wakes up:

Objective complete, fly back up to the Akhenet Fields to speak with Vizier Tanotep.

This concludes the Vizier's portion of the fork. Complete the High Priest's and the High Commander's quest chains as well to be offered the conclusion, The High Council's Decision.

Caimas is a level 83 elite with ~644,000 health. This is a fight based primarily on kiting. Have him run over Croc Eggs, which are scattered around the perimeter and in the pit, to slow him down and deal some damage over time. Keep running him over croc eggs as the "Tiny Teeth!" debuff he is afflicted with does not last forever... Caimas has no other moves outside of basic melee, which hits for ~4-4.5k on plate, upwards of 6k on cloth.

This fight is primarily about patience. Be careful when kiting him; if you go too far outside the perimeter of the Pit, you may aggro the Neferset Scalehunters, who will then join the attack. Also, don't run over the eggs yourself, as you will then be afflicted. Caimas is affected by slowing attacks as well, such as a hunter's [Concussive Shot] or a mage's [Frostbolt], so use them wisely just as the debuff from the eggs wears off. If you are a pet class, be sure to set your pet to passive, otherwise Caimas will waste time stopping to kill them rather than chase you.

2011-12-30: There is a bug where regardless of what you do, as soon as the target has run over some eggs, you will shortly be hit either once, or repeatedly, by a "daze" from some crocs, and then all your life will disappear and you'll be dead. This may even happen if you did not pull the target and just happened to have landed nearby while someone else had pulled the target. This effectively makes this quest impossible to complete alone. 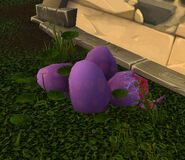 The Croc Eggs.
Add a image to this gallery

Retrieved from "https://wowwiki.fandom.com/wiki/Quest:The_Pit_of_Scales?oldid=2534529"
Community content is available under CC-BY-SA unless otherwise noted.