The Nation of Kul Tiras

Daughter of the Sea

Kul Tiras is the greatest naval power in all of Azeroth, and a former ally. But we've had little contact with them since Jaina's father, Lord Admiral Daelin Proudmoore, was defeated at Theramore.

Many have criticized Jaina's decision that day, saying she believed so deeply in the promise of peace between the Alliance and Horde that she betrayed her own father.

Perhaps she feels the time has come to atone for this.

Loath as I am to put Jaina in harm's way... Kul Tiras must join the Alliance.

Home again, after all this time.

Jaina Proudmoore says: I must prepare my ship. Champion, meet me in the harbor when you are ready to depart.

Are you prepared for the journey to Kul Tiras? 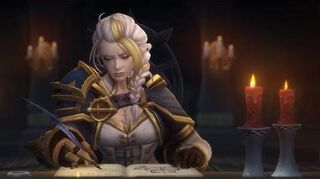 Retrieved from "https://wowwiki.fandom.com/wiki/Quest:The_Nation_of_Kul_Tiras?oldid=2849582"
Community content is available under CC-BY-SA unless otherwise noted.