Return to the Black Temple 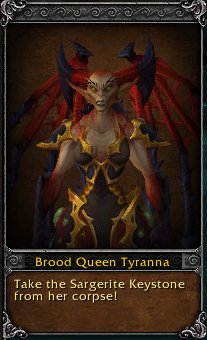 Kill Brood Queen Tyranna and take the Sargerite Keystone. Then, join the others down-below in the portal chamber.

<name>, Brood Queen Tyranna is just ahead in the command chamber. The others already charged in. She has the Sargerite Keystone in her possession. Finally, the object of all our sacrifice is at hand.

Now that we have the keystone in our possession, there is just one last thing left to do...

Retrieved from "https://wowwiki.fandom.com/wiki/Quest:The_Keystone?oldid=2807944"
Community content is available under CC-BY-SA unless otherwise noted.