The Gifts of Loken

Slaves of the Stormforged & The Dark Ore

The one who commands the stormforged iron dwarves is called Valduran the Stormborn. Although I have never seen them, it is said that his master, Keeper Loken, who took over Ulduar, has given Valduran powerful titan artifacts.

It could explain the strength and ferocity my men see in the stormforged warriors.

Valduran's base, Nidavelir, lies to the southwest, across the Snowdrift Plains. Go there, <name>, and neutralize his power. Destroy these gifts of Loken's and help us to sap the strength of his followers.

Is it true? Does Valduran possess powerful relics of the titans? Did you destroy them?

You've weakened the stormforged considerably, but they'll keep fighting. Their casualties matter nothing to them, while our defenders continue to fall. Even if it costs them a hundred or a thousand iron corpses, they'll keep fighting until we've been pounded to gravel.

While killing golems, loot the 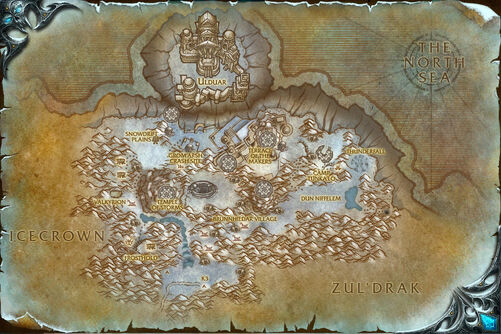 Retrieved from "https://wowwiki.fandom.com/wiki/Quest:The_Gifts_of_Loken?oldid=2657826"
Community content is available under CC-BY-SA unless otherwise noted.