Some Spraining to Do

Take No Prisoners, On Second Thought, Take One Prisoner

Return to the Temple of Earth

Hop on, <name>. Let's see what Mr. Ogreface has to say for himself.

Don't be shy, Stormbeak's only ever dropped a passenger a couple of times before.

We have our answers, <name>. Let's report back.

Hop on. Stormbeak flies to the starboard rotor and hovers just above it at various heights, as a not-so-implicit threat to Mor'norokk: 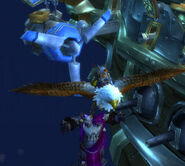 Flying off to interrogate Mor'norokk. 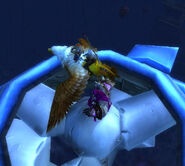 Over the gunship's blades, he talks. 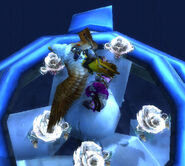 Mylra reveals he was never in any danger.
Add a image to this gallery