On the western edge of the Pale Roost, you will find a resonating crystal. Strike it with the mallet and the broodmother will come.

Be ready for battle. I will be there to aid you, but she will not be easily overcome.

("Aeosera, Broodmother of the Stone Drakes.")

This broodmother has taken wing for over these stone drakes for nearly 300 years. She is quite strong, even for a stone dragon.

Impressive, fleshling. You are far more capable than I initially assumed.

I will extend that sentiment to the Stonemother as well.

Fly west to find the resonating crystal. Bang on it and Terrath will come and throw the player up to some floating rocks!

Terrath the Steady yells: The broodmother flies above us! Do not fear, fleshling. I am called "The Steady" for a reason...
Jump from rock to rock to attract the attention of the Broodmother!

Jump up the stairway of rocks by right-clicking on them to reach a "plateau" of rocks all floating at the same height. Keep jumping about until...

Aeosera will target the rock the player is standing on, then cast searing breath at it. At the end of the cast, the rock is destroyed!

So... attack quickly and keep moving. Every now and then, selected boulders gain one of two abilities:

She has 375k+ health and will submit after getting knocked down to 40,000 health or so.

This concludes Terrath's chain. Head all the way to the east to complete Rocky Upheaval. 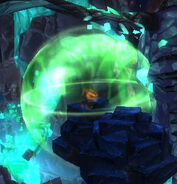 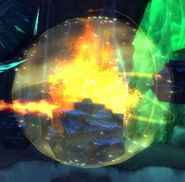 The Crystalline Barrier.
Add a image to this gallery

Retrieved from "https://wowwiki.fandom.com/wiki/Quest:Resonating_Blow?oldid=2518066"
Community content is available under CC-BY-SA unless otherwise noted.