The troggs in Deepholm have proven to be every bit as hostile as the ones in Azeroth. Yet perhaps their presence will prove useful to our efforts.

The crates they use for trawling through the mercury will conceal you perfectly if you submerge yourself beneath the marsh.

Use it to approach the Twilight's Hammer camp in the eastern end of the Upper Silvermarsh undetected.

We have the information we need. Let's not tip our hand by engaging the enemy too soon.

The crates are not dropped by the troggs... One can be found at [71.7, 64.3] by the mercury pools! However, it's guarded by a trogg. Kill it to collect [Maziel's Research], which starts Twilight Research. Loot one:

Get relatively close to the camp (say the island at [75, 64] just to the north of where the Forgemaster and his three bodyguards are standing) and use the crate to buff with Trogg Crate: "You have a Trogg Crate on your head. This should fool the enemy if you can submerge the rest of your body." Take the hint and get in the mercury. If swimming, players will also be buffed with Submerged: "You are submerged", which provides waterbreathing. Swim closer to the camp until one of the Ogre Bodyguards yells: 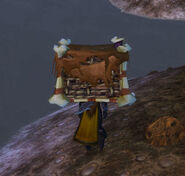 Manastorm and Azil meeting.
Add a image to this gallery