According to the orders you found, there is a key inside the tent[62.9, 59.3] in the southeastern end of Deathwing's Fall.

Obtain it and free the slaves in the quarry to the south.

What have we discovered?

Let us find this journal. We're getting close to the World Pillar fragment. I can sense it.

Southeast corner of the area, on the north side of the lava pit is a tent. Just inside at is the Slavemaster's Coffer, which has the Twilight Slaver's key. From there, keep heading southwest to reach the quarry. Interact with the Ball and Chain to free the slave. Free six to automatically complete the quest. 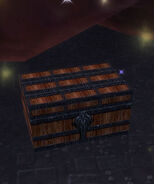 The coffer that holds the key.
Add a image to this gallery