Escape From the Lost City

Now that you've been suitably rewarded, I hope I can speak with you frankly.

I was pursuing my brother's release strictly through diplomatic means in order to avoid bloodshed.

Now, the enemy is sure to seek retaliation.

Speak to Nomarch Teneth at the Tahret Grounds to the east, Sun Priest Asaris at the Seal of the Sun King to the north and Asaq at Mar'at to the west. Find out where the enemy will strike.

You've returned, <name>. Have you completed the task I request of you?

How could I not have seen this?

Side quest time! Head north first. Asaris can be found just northwest at the Seal of the Sun King:

I might be able to help. Were the Neferset behind this?

No. This was the work of common Wastewander bandits.
It is rumored they're joining a more regimented group to the west. Their violence is barbaric.

He offers two side quests: Relics of the Sun King and Venomblood Antidote.

Asaq can be found to the southwest at Mar'at:

I heard you were in town. What a strange creature you are.
You wish to speak to me?

The king wishes to be informed about recent Neferset activity.

No, no Neferset movement. But I just received word that the city of Orsis is being hit by the largest sandstorm anyone has ever witnessed.
I was about to send word to the king myself, but perhaps you can relay the information.

Mack stands next to Asaq offering Take it to 'Em!, the breadcrumb to Harrison Jones's storyline starting up at Khartut's Tomb.

State your business. Be brief, if possible.

King Phaoris sent me to ask you about Neferset activity.

The king is sending a stranger to gather information for him? I suppose you must be that... what's the word? <Race>? Yes, that <race> that rescued Prince Nadun.
At any rate, I haven't seen any signs of the Neferset scum this far north. There are plenty of other nuisances to be dealt with, however. 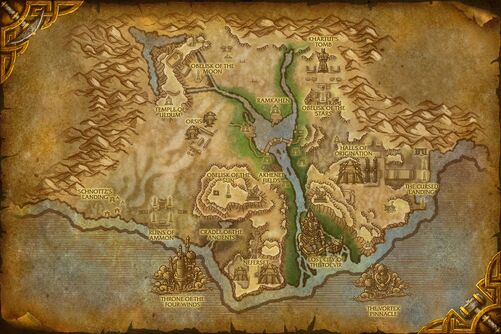 Retrieved from "https://wowwiki.fandom.com/wiki/Quest:Impending_Retribution?oldid=2658437"
Community content is available under CC-BY-SA unless otherwise noted.