I've Got This Guy, They Don't Know What They've Got Here

Recover the Lens of the Sun.

This guy just won't go down!

You're doin' great, kid. Only one thing left to do.

According to my research, there should be a titan statue down below. Use the device to activate it, then break it down.

If my theory is correct, that statue holds the key to reactivating this obelisk.

Time to see if this old mechanism still works...

According to Harrison's notes, placing the lens upon this dais should re-activate the obelisk.

Exactly what that means remains to be seen... 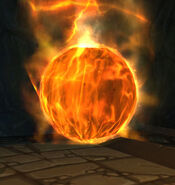 Using the Lens on the ancient mechanism.

The Obelisk of the Sun reactivated!
Add a image to this gallery

Retrieved from "https://wowwiki.fandom.com/wiki/Quest:Ignition_(Uldum)?oldid=2661355"
Community content is available under CC-BY-SA unless otherwise noted.