Swim to the surface, retrieve the flare gun, and fire a rescue flare towards the <Alliance/Horde> Ships.

All done! I'm confident it will work. And not a scrounger in sight to pop a hole in it this time. <Fortuitous/Well played>.

<Jorlan/Toldrek> already swam up to catch it<. Swam up and stopped to wait for it/, all concerned about currents and what not>. He said you'd get the honors though. <Jorlan's nice like that/Nice guy - don't know how he lasts>.

Go to the top with the balloon, take the flare gun from the crate, and scan the horizon for <Alliance/Horde> ships. If you see any, fire the flare towards them. That's it! All there is to it.

Those aren't trade ships, those are war ships. Still, this is an incredible stroke of luck. Fire that flare off and pray that they see it.

Perfect! There's no way they missed that, fighting or not.

Hexascrub/Fiasco says: Up you go!

Swim directly up. The rescue balloon, the Survival Kit Remnants, and Jorlan/Toldrek are all on the surface. Break surface and loot the crate to get the [Rescue Flare], aim toward the ships, and use it.

On breaking the surface:

Jorlan Trueblade/Bloodguard Toldrek says: Fresh air! <By the Light/Grom's beard>, I missed it. We have some ships just in sight to the north, <name> - fire the flare in their direction.

After firing off the flare:

Jorlan Trueblade says: Ha ha! There's no way they'll miss that, cannon fire or not.
Bloodguard Toldrek says: Don't worry - if they try to pretend they didn't see it, I'll swim over there and drag them off of their ships myself.

When You attain the quest, go STRAIGHT UP. The next step in the quest is at the surface. If it isn't there. drop the quest and re-do. 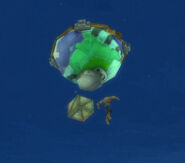 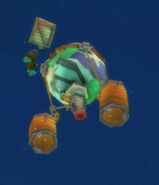 Your rescue awaits.
Add a image to this gallery

Retrieved from "https://wowwiki.fandom.com/wiki/Quest:Honor_and_Privilege?oldid=2512184"
Community content is available under CC-BY-SA unless otherwise noted.