Hints of a New Plague?

Protect Kinelory until she returns to Quae.

You've done a great service for us, <name>. Thank you.

I hope Kin wasn't too much of a handful down there. She's very friendly, but can be just as deadly when you're her enemy.

Upon completion of this quest you will gain: 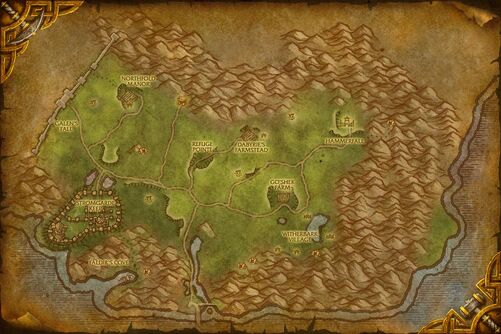 This is a fairly difficult escort, compounded by the fact that the Forsaken Courier and his Forsaken Bodyguards could be near Apothecary Jorell at the time that Kinelory gets to him.

Kin runs east to a location where she can get to the bottom without taking fall damage, then turns around west hiding behind the stables and silos. There are two scripted spawns of two Hammerfall Grunts, one behind the second silo [59.6, 55.6] and the other just south of the barn [59.8, 57.9]. After walking between the two silos and south in front of the barn she'll enter the building with Apothecary Jorell in it. Afterwards, she'll run south to exit the farm then around the edge of the cliff to get back to Quae.

On accept
Kinelory says: Well then, let's get this started. The longer we're here, the more damage the undead could be doing back in Hilsbrad.

Reaching the bottom
Kinelory says: All right, this is where we really have to be on our paws. Be ready!

On aggro
Kinelory says: Attack me if you will, but you won't stop me from getting back to Quae.

Reaching Jorell
Apothecary Jorell says: You have my word that I shall find a use for your body after I've killed you, Kinelory.

Defeating Jorell
Kinelory says: Watch my rear! I'll see what I can find in all this junk...
Kinelory begins rummaging through the apothecary's belongings.
Kinelory says: I bet Quae'll think this is important. She's pretty knowledgeable about these things--no expert, but knowledgable.
Kinelory says: Okay, let's get out of here quick quick! Try and keep up. I'm going to make a break for it.

Returning to Quae
Kionelory says: We made it! Quae, we made it!
Kinelory hands her pack to Quae.

Retrieved from "https://wowwiki.fandom.com/wiki/Quest:Hints_of_a_New_Plague%3F_(4)?oldid=2336627"
Community content is available under CC-BY-SA unless otherwise noted.