Put on the Fish Hat, then swim through the coral in Underlight Canyon to attract 30 Underlight Nibblers.

<Orako rolls the glow-juice into a ball, then attaches it to a device that he's clearly been working on for some time.>

Here, I got you this hat. It has a light on it, and it will make fish follow you. Just like the murlocs!

The murlocs like to hunt in the kelp and coral along the sides of the canyon. If you put on this hat and swim in that kelp, you might catch some fish like they do.

How many did you catch?

Hmm... you got a lot of fish, but none of these are the ones that ate my wolf. I think it was probably a bigger fish.

Pick up Die Fishman Die before heading out. Put on the hat, then go swimming through the kelp. While killing deep sea murlocs, one of them will drop the [Enormous Eel Egg], which starts the quest I Brought You This Egg. 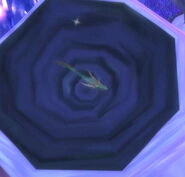 An Underlight Nibbler. Notice how well they blend in.
Add a image to this gallery

Retrieved from "https://wowwiki.fandom.com/wiki/Quest:Here_Fishie_Fishie?oldid=2513680"
Community content is available under CC-BY-SA unless otherwise noted.