The Archstone was being transported inside a flying Horde gunship called the Storm's Fury.

The airship crashed south of here and our scrying has revealed the Archstone's no longer on it.

Search the ships for clues related to what might've happened.

Did you find out what happened to the Storm's Fury?

The clues point to an obvious conclusion. Too obvious perhaps.

Pick up Elemental Energy and The Earth Claims All before heading out. The shipwreck is southeast of the temple. Once you get to the wreckage, the easiest thing to do is locate the Captain's Log, as it will appear as a

on your minimap; the clues will not.

Face outward from the entry. Your next clue will be on the ground, diagonally to the left between the two ship halves. Find a Slain Cannoneer lying on the ground:

The cannoneer's hands are black with gunpowder.

From the Cannoneer, look again diagonally to the left as you face the halves of the ship, to the second half of the shattered ship. On the ground is an Unexploded Artillery Shell: 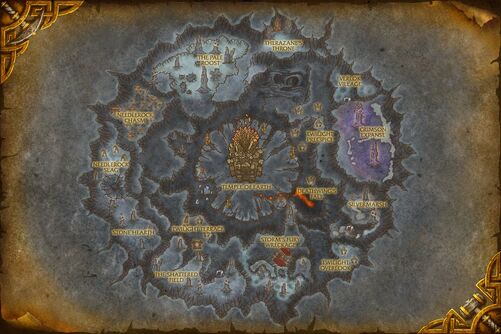 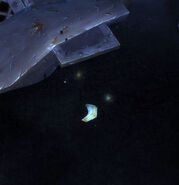 The Unexploded Artillery Shell.
Add a image to this gallery

The name of the quest is a salute to the classic English story, Watership Down.