Went 'Out Back' With Schnottz

Come out back vizh me, <race>.

Zhere is somezhink I vould like you to see.

So, this Schnottz character is working with Deathwing!?

This is even more distressing than you think...

Commander Schnottz leads the player out behind the main building, accompanied by two Menacing Emissaries.

The player is escorted to a now-abandoned dig site.

The dragons soar off, leaving the player to cower before Schnottz and his gun.

Harrison Jones appears behind Schnottz, swinging to the rescue. Schnottz is knocked off his feet, and the player retrieves his gun, pointing it at him. 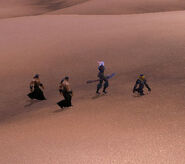 Being led out back. 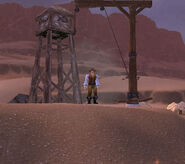 Harrison Jones to the rescue!

Turning the tables.
Add a image to this gallery

Retrieved from "https://wowwiki.fandom.com/wiki/Quest:Firing_Squad?oldid=2522764"
Community content is available under CC-BY-SA unless otherwise noted.