[Boots of the Skybreaker]

In Enraged Spirits of Air, player finds and destroys ten air elementals, capturing their souls with the Totem of Spirits.

Earthmender Torlok at the Altar of Damnation in Shadowmoon Valley wants you to use the Totem of Spirits to capture 10 Airy Souls.

Venture southeast, hero. When you see fields of gigantic blue crystals jutting out from the land, you will have reached your destination. It is there, at the Netherwing Fields, that you will find the enraged spirits of air. They roam the cliffs and mountain bases that surround the fields.

Destroy their tortured forms and capture their souls with the totem of spirits. Return to me when this is done.

Soon, we will speak with the spirits.

Allow me to reward you for undertaking such an arduous task, hero.

Now, we must get to work! Please stand back so that I may place the totem and unleash the souls.

Cut Scene on completion: Information from the Elementals

You are given a totem which you must drop before the Enraged Air Spirit is killed. Once it is killed within range of the totem, your quest log will mark off one more soul captured. Multiple spirits can be killed using the same totem (about three at the maximum before it dies), but the totems are unlimited and don't have a long cooldown for placement, so this is somewhat unnecessary. These elementals are found to the south, 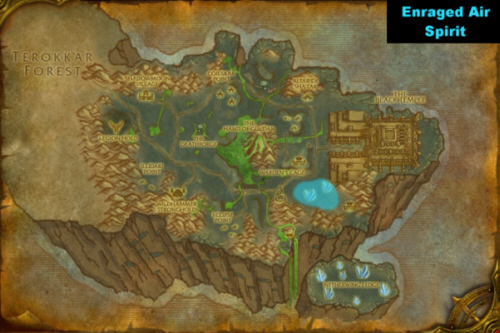 Once this quest is turned in, Earthmender Torlok summons the four different spirits which have been captured: Earth, Fire, Water and Air. He then proceeds to apologize to them, and ask what can be done to restore them. There is some dissent as to if they should tell us this, but they eventually say that they were made this way when Gul'dan accidentally summoned a fire lord. The only way to fix things is to resummon him (and kill him).

Retrieved from "https://wowwiki.fandom.com/wiki/Quest:Enraged_Spirits_of_Air?oldid=2317553"
Community content is available under CC-BY-SA unless otherwise noted.