[Mark of the World Tree]

The Sanctuary Must Not Fall

Our invasion plan looks to have backfired. Several of our birds have already reported in, speaking of fires breaking out across the vales of central Hyjal.

Now, many of our druids are stranded out in the field, unprepared for such a large-scale attack. Thisalee was near Ashen Lake, and several others were out in the Regrowth, to the northeast.

Go, <name>! Find them, and make sure that they do not succumb to this backdraft!

They've pushed us back to the Sanctuary. We are vastly outnumbered. At this rate, the Guardians of Hyjal stand little chance of survival.

I'm glad you're here with us. 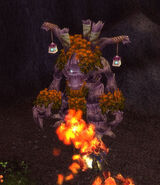 The Sanctuary under attack upon returning.
Add a image to this gallery

When assisting Thisalee
Thisalee says: Hey, <name>, you're here! These guys came out of nowhere! Help me out while I catch my breath.
Thisalee says: I can handle things from here. I'll meet you back at the Sanctuary, <name>.

When assisting Elderlimb
Elderlimb says: Your arrival is timely, <race>. I tire of fighting these wretched things.
Elderlimb says: I can hold them off from here, <race>. We will meet again at the Sanctuary of Malorne.

When assisting Tholo and Anren
Tholo says: Look, Anren! <Name> has come to help us!
Tholo says: Thank you, <name>. As long as we stay together, Anren and I will be fine. Go check on the others!

Retrieved from "https://wowwiki.fandom.com/wiki/Quest:Caught_Unawares?oldid=2507433"
Community content is available under CC-BY-SA unless otherwise noted.