Scalding Shrooms, Into the Totem

Unplug L'ghorek, Fiends from the Netherworld

Obtain the Brain of the Unfathomable.

I now imbue you with the energies of the corrupting faceless.

Swim down to my luring totem[47.1, 27.3] in the trench to the northeast. Release the energies through it. Bring back the brain of their leader.

Call down to Ick'thys the Unfathomable... it will come!

With the Unfathomable's brain, we still may yet be able to communicate with L'ghorek, the dying ancient one in front of us.

And now we will see if we can get you into L'ghorek to speak with it before it dies.

Head northeast, down and away from L'ghorek. Look for a big green runic circle. The totem is just to the south of it. Ick'thys is a level 82 faceless one, with 77,000 health and the following abilities:

Ick'thys the Unfathomable yells: I laugh at you, feeble <name>, but I will oblige. Now, let us return to my master, below! 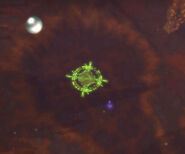 The summoning point.
Add a image to this gallery

Retrieved from "https://wowwiki.fandom.com/wiki/Quest:..._It_Will_Come?oldid=2557197"
Community content is available under CC-BY-SA unless otherwise noted.