Head of House Ashvane, President of the Ashvane Trading Company

Lady Priscilla Ashvane is the head of House Ashvane and the Ashvane Trading Company, an old friend of Lord Admiral Katherine Proudmoore. She is one of the main antagonists on Kul Tiras during World of Warcraft: Battle for Azeroth.

She is voiced by Frances Barber.[citation needed]

Priscilla lost her husband at Theramore at the same time as Daelin Proudmoore's death.[1] She hated Jaina Proudmoore for her role in the Kul Tirans' deaths.[2]

Priscilla had been planning to usurp Katherine as the ruler of Kul Tiras, having her company create Azerite weapons which were then shipped to the Irontide Raiders who she hired to attack the Proudmoores. Katherine had heard the rumors about Priscilla just like anyone, but whether out of fear or loyalty she chose to ignore them. Taelia and an adventurer from the Alliance spoke to her to reveal the truth about Priscilla's plans to usurp the Proudmoores, but Priscilla admitted to all of it and then escaped the scene by igniting a smokescreen.[4] Although the attacking forces from the Ashvane Trading Company were dealt with, Priscilla herself ultimately got away by jumping into the sea when she seemed cornered.[5] 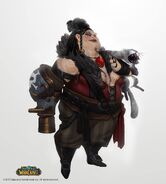 Pirate Queen concept
Add a image to this gallery

Lady Ashvane is the powerful Matron of House Ashvane and seeks to bring Boralus under her control. With an arsenal of azerite[sic] weapons at her command, she will obliterate anyone who stands in her path.

Retrieved from "https://wowwiki.fandom.com/wiki/Priscilla_Ashvane?oldid=2852681"
Community content is available under CC-BY-SA unless otherwise noted.