These gauntlets are enchanted by elder troll priests, who practice a devout belief in a pantheon of powerful primitive gods. By calling upon the favor of these ancient mystical forces, the priests are able to infuse certain rare items, such as these gauntlets, with unparalleled magical abilities.[1] 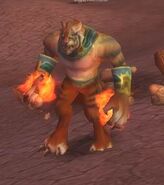 Shirvallah, fill me with your RAGE!

A tauren female wearing a Primal Blessing (armor not included).
Add a image to this gallery

When the set bonus procs, it gives the player the appearance (character model) of the "tiger boss", High Priest Thekal, in addition to the attack power increase. This effect makes the Primal Blessing set sought-after, even amongst players who have access to more powerful gear.

Retrieved from "https://wowwiki.fandom.com/wiki/Primal_Blessing?oldid=2004244"
Community content is available under CC-BY-SA unless otherwise noted.