Priests are masters of healing and preservation. Infused with the Light, they can restore their wounded allies, shield them in battle, and even resurrect them. While they have a variety of protective and enhancement spells to bolster their allies, they can also wreak terrible vengeance on their enemies, using the grand powers of the Holy Light to smite and purge, or the devastating powers of the shadow to decimate their minds. The priest is a diverse and powerful class, highly desirable in any group and capable of fulfilling multiple roles.

The priest is perhaps the best healing class in the game with a surprisingly strong damage potential. Their ability to heal and buff allies, avoid aggro, dispel buffs on enemies, dispel debuffs on their allies, and resurrect fallen comrades makes them an important member of any group, whether PvP or PvE.

Priests are limited to cloth armor and the following weapons: daggers, one-handed maces, staves, and wands.

Priests practice a complex, organized form of spirituality. It can be built around moral philosophy, the worship of a particular deity (such as Elune), and/or idol worship. This is in contrast to the reverence of the elements that shamans practice or the close divine connection with animals and the wilderness that druids maintain. Priests serve not only as influential religious figures in their respective societies, but also as powerful practitioners of divine magic. They use this to heal and protect, or harm and weaken.

Devotion to the faiths of Azeroth leads many priests to the paths of courage and heroism. In dark times, priests carry the Light of faith with them as a reminder of the powerful forces at work beyond the comprehension of the peoples who walk the land. Powerful healers with an intimate connection to the divine, priests are empowered with abilities that aid them in times of dire need.[1]

Priests comprise quite a varied group in Azeroth. Many are followers, in some manner, of the Holy Light. Some priests choose to be pyremasters or High Priests, while some of the most experienced become epic priests. There are also racial restrictions to some titles, such as witch doctor for trolls and Priestess of the Moon for night elf females.

The priest class can be played by the following races:

The Clerics of Northshire were human priests who served the kingdom of Stormwind during the First War. The clerics served as healers on the battlefield, but were ill-prepared for the hazards of combat, thus suffering heavy casualties. This order was largely destroyed, and the Second War saw fragile priests replaced on the battlefield by armored paladins, the Knights of the Silver Hand, established by the clerics' leader Archbishop Alonsus Faol and his apprentice, Uther the Lightbringer.

During events of the Third War, despite the high elves' official departure from the Alliance, some elves still remained true to their former human and dwarven allies. The altruistic priests of Quel'Thalas refused to abandon their roles as healers and agreed to remain in Lordaeron, despite the edicts from their reclusive masters in Silvermoon. The high elven priests used their Light-given powers to heal the wounded and bolster the spirits of Lordaeron's fighting elite. A holy field medic, these padres roam the battlefield curing the wounds of fallen comrades.

The Draenei have been worshipers of the Light for at least as long as they have known the Naaru, and draw their wisdom and power from them.

Forsaken who once followed the tenets of the Holy Light altered their philosophy upon their transformation. Most Forsaken have abandoned religion, just as they believe it abandoned them. Some still adhere to their old faiths, such as the Holy Light. Priests of the Holy Light in particular struggle to reconcile the philosophy that guided their life with their unfortunate new condition. Some balance their old beliefs with their new forms, but most Forsaken priests belong to The Cult of Forgotten Shadow. Lost and hurt, these priests founded a new religion based on a self-centered version of their former faith. This philosophy centers around self-empowerment and a desire to balance life with death. They can no longer use the Holy Light and have since learned how to use the shadow.

The troll priesthoods, much like the shamans and witch doctors of the troll tribes, are comprised of spiritual advisers and caretakers. With trolls being naturally superstitious and spiritual, it allows the various troll priests to manipulate the spiritual energy of the world in order to either heal or harm their targets. The energies the troll priests draw can come from various sources, be it Loa spirits, voodoo magic, or the target itself. Drawing upon these energies, troll priests either mend or harm, depending on which blessing the spiritual entity bestows. Arguably, in World of Warcraft, troll priests can be considered witch doctors in a cultural perspective, in equal terms with the shamans.

In Cataclysm, the Tauren gained the ability to become priests. It is possible they use the light of the Sun in their spells, as opposed to the Holy Light. This is similar to how the night elves use the power of the Moon, their goddess Elune, instead of the Holy Light.

With the announcement of the Cataclysm expansion, gnome healers finally became playable. Gnome priest NPCs have existed in Azeroth for some time, but the destruction brought on by Deathwing likely inspired many more gnomes to turn to their allies and adopt devotion to The Light. 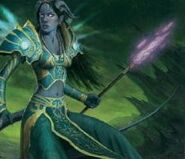 For other uses of the name "Shadow", see Shadow (disambiguation).

Priests are generally regarded as a tough class to play in PvP, but they are highly desired in battlegrounds. They are arguably one of the best healers in the game and a great utility class. While the discipline and holy specializations focus on making very strong healers, the shadow specialization focuses on damage dealing while restoring the party's health and mana at the same time.

Many players regard healing priests as being the jack-of-all-trades healing class due to the great diversity of healing spells at their disposal. This includes Direct Heal, Heal over time, Area of Effect healing, and the ability to shield targets from damage. Due to this great diversity, a healing priest can heal any encounter while other healing classes may find it more difficult.

Healing priest tactics generally involve conserving mana while choosing the ideal time to heal. Priests must decide which spell to use and at what time. While Flash Heal and Power Word: Shield may be very mana-intensive, they are excellent methods to quickly rescue someone from death. Many priests use a tactic known as stopcasting. In this method, the priest will constantly use Heal; however, if in the 2.5-second cast time the target never takes sufficient damage, the priest will cancel the heal before it goes off and begin recasting.

The goal of a shadow priest is to keep a series of spells with unique cooldowns and durations going constantly. They must cycle through several direct damage, channeled, and damage over time spells. A shadow priest is unique in that Vampiric Embrace restores health to the priest's entire party, which is based upon the damage the priest deals.

Though many priests found themselves originally pigeonholed into a single role in classic World of Warcraft, many are experiencing greater freedom in a post-Burning Crusade raiding environment. Priests are capable of filling both healing and damage-dealing roles, depending on the priest's spec and the need of the raid. This flexibility is further aided by the increased debuff cap, making it easier to allow multiple shadow priests to contribute without being detrimental to a raid.

Proficient and skilled healers are highly valued, capable of utilizing a variety of heals and numerous buffs that benefit raiders such as Power Word: Shield. Considered by some to be mana-inefficient when compared with other healing classes, the introduction of the Shadowfiend in the Burning Crusade allowed a healing priest to regain a significant amount of mana used to continue healing while providing negligible damage against one target. Spirit of Redemption allows holy priests to continue casting healing spells on a raid for 15 seconds beyond death with no mana expense.

For Discipline priests, their strength lies in preventing damage. They cannot put out as much raw healing as holy priests can. They prefer to strengthen allies and prevent damage from happening by shielding others. Discipline priests are capable of healing multiple targets, but in a large group their role will usually be to keep the main tank alive. Their specialization focuses on protection. While healing priests do not possess the raid healing output of a druid or the tank healing capabilities of a holy paladin, priests are incredibly proficient at both of theses roles, earning them the name "The jack of all trades, master of none".

Shadow priests are a very dangerous encounter for their enemies. Players should not lose concentration while fighting a shadow priest as they're able to CC their targets, damage them, and have a Mana/HP recovery - everything at once. The strength and versatility of a shadow priest has been recognized as an invaluable asset in both five-mans and raids. A shadow priest is capable of contributing significant damage as well as providing a variety of buffs and debuffs that benefit the group as a whole. Vampiric Embrace gives a portion of the shadow priest's single-target shadow damage as a group-wide heal that can aid in keeping the health of group members up; this can be especially helpful when grouped with a tank and warlocks who Life Tap frequently, as well as rogues and Feral druids performing melee damage.

In addition to providing significant damage and buffs, shadow priests have the flexibility to drop out of Shadowform and provide backup healing if the situation warrants, though they typically suffer from reduced bonus healing.

HowToPriest.com The #1 Priest Community -- Howtopriest.com is a World of Warcraft discussion website for every spec of the Priest class. We have PvE guides, best-in-slot lists, UI guides, a media section that includes videos and live streams, gear help forum, and helpful, knowledgeable members.

Retrieved from "https://wowwiki.fandom.com/wiki/Priest?oldid=2848193"
Community content is available under CC-BY-SA unless otherwise noted.