Player vs. Environment, commonly referred to as PvE by most online games and gamers, is the player-controlled character (you) competing against the game world and its computer-controlled denizens, as opposed to Player vs Player. To the PvE focused player the primary challenge comes from tough mobs like instance bosses rather than other player characters.

PvE also refers to the PvE type of realms which are realms where "consensual combat" generally prevails. This means most players will only engage in PvP combat if they choose or do some action that enables their PvP flag.

Pros and cons of PvE realms 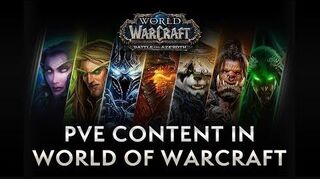 Retrieved from "https://wowwiki.fandom.com/wiki/Player_vs._Environment?oldid=2850430"
Community content is available under CC-BY-SA unless otherwise noted.