A pig is a domesticated descendant of the wild boar (colloquially called the boar). Pigs are much smaller than their wild cousins and are critters in Warcraft III: Reign of Chaos, while they are beasts and companions in WoW. A typical pig has a large head with a long snout. The snout is used to dig into the soil to find food. They are often raised by orcs for meat (Pig Farm). A few pigs may, in fact, be polymorphed creatures. Unfamiliar pigs in unlikely habitats should be viewed with suspicion! It is possible to obtain a pig for a pet during Children's Week in May.

The Pig in Warcraft III: Reign of Chaos. 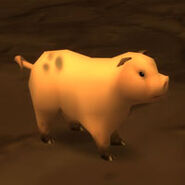 A pig in World of Warcraft.
Add a image to this gallery
Retrieved from "https://wowwiki.fandom.com/wiki/Pig?oldid=2751123"
Community content is available under CC-BY-SA unless otherwise noted.