This article concerns content exclusive to Mists of Pandaria.

Previewed at BlizzCon 2011, the Pet Battle System allows most formerly non-combat pets, also known as companions, to become battle pets and battle each other for bragging rights, leveling, and addition of abilities. While this feature was not released until the

Mists of Pandaria expansion was released, the expansion will not be required to use the pet battle system and will be available to all players.[1]

From the official World of Warcraft: Mists of Pandaria website:[2]

For years, your faithful vanity pets have accompanied you on countless adventures. They've provided you with comfort, company, sometimes even with entertainment and hours of fun. Maybe you only have a handful of pets you really love, or maybe you have made it your quest to capture as many of them as you can. The fact remains, heroes love their little companions... and in Mists of Pandaria, they will take the spotlight in a brand-new way.

This system acts much like a secondary profession and is available to all players.[3]

Companions are now able to battle each other in a new turn-based combat system to level up and unlock new abilities. Pets are also able to encounter and battle pets in the wild to capture them for the player.[2] Players are able to fight with teams of pets up to 3 for each player at a time.[4] Customization, progress status, abilities and info are tracked in a new Pet Journal.[4]

You are also able to seek out Master Pet Tamer NPCs (were called master pet trainer) to learn new pet abilities from them if your pet is worthy and can defeat the trainer's pet.[2]

Engaging your pet in pet battles will award it experience. Players may disable invites to pet battles.[5]

To get the highest percentage possible of participants, Blizzard has decided that players do not know the identity of players they are fighting against. This is to avoid trash-talking. Another way they are hoping to diminish the negativity involved in some aspects of PvP, they are also only recording wins.[6]

Battle pet hit accuracy was changed in Patch 5.3 so that the chance of pets dodging attacks and pets missing is reduced.[7]

Some more details were released during the March 2012 press event:[8]

Known limitations on pets that can be used for battle:

You track all your battle pets via the Pet Journal and build teams to battle other player's pet teams. This will be the main UI for the system when not in battle.

Details from the Beta FAQ:[12]

Battle pets will fall into one of 10 possible pet families. Each pet family has its own strengths and weaknesses when up against certain other battle pet families.[13][14][15][16]

Attacks each have their own "family", which may not match the family of the pet, and may be from a variety of different families on one pet. For example, a Harpy Youngling is a

Humanoid pet whose attacks are all of the

Critter attacks (because its family is

Humanoid), but will do extra damage (

Dragonkin, rather than more to

Dragonkin and less to

Beast (because its attacks are

Flying type rather than

The diagrams below show in a variety of ways how families are strong or weak against each other. The two left diagrams show what family is strong against another by having a red arrow point (

Weakness) pointing to the family that takes less damage.

The right side diagram shows this in a different form, the large icon shows how it is affected by other families. The upper left is a family that attacks it strongly (

Weakness defending), the upper right is a family that it attacks strongly (

Strength attacking), the lower left is a family that attacks it weakly (

Strength defending), and the lower right is a family that it attacks weakly (

Battle pets have abilities, just like player characters, but they are more simplified, generally increase in effect based on battle pet level, and have specific strengths and weaknesses against other battle pet families.

Dragonkin: [Dragonkin]ω ϖ - Dragons deal 50% additional damage on the next round after bringing a target's health below 50%.

Humanoid: [Humanoid]ω ϖ - Humanoids recover 4% of their maximum health if they dealt damage this round.

Magic: [Magic]ω ϖ - Magic pets cannot be dealt more than 35% of their maximum health in one attack.

Mechanical: [Mechanical]ω ϖ - Comes back to life once per battle, returning to 20% health.

Undead: [Undead]ω ϖ - Undead pets return to life immortal for one round when killed.

This section needs to be cleaned up to a higher standard of quality. Reason: Needs to be wikified or removed.

A quick reference to pet damages

Does more to Elemental

Does less to Magic

Does more to Critter

Does less to Flying

Does more to Undead

Does less to Humanoid

Does more to Magic

Does less to Undead

Does more to Mechanical

Does less to Critter

Does more to Aquatic

Does less to Dragonkin

Does more to Dragonkin

Does less to Beast

Does more to Flying

Does less to Mechanical

Does more to Beast

Does less to Elemental

Does more to Humanoid

Does less to Aquatic

When you defeat an opposing pet, the experience awarded is calculated using this formula:

The quality of the defeated pet does not affect experience gain, and you get full experience if you capture or defeat your opponent.

Example 1: If one of your level 3 pets defeats a level 2 opponent, it will receive 48 experience.

Example 2: If you have three active pets of level 4, 5, and 9 that all survive a battle against a level 6 opponent, the experience awards would be as follows:

Example 3: If two of your high level pets die in combat against a level 16 opponent, and your level 12 pet survives, the surviving pet would receive 147x2.5=367 experience.

There are two cases where this table is not accurate:

1) If your pets are different levels, the higher level pet will "steal" a few experience points from the lower level pet. You can ignore this becauswe usually only one or two eperience points are transferred, which is irrelevant.

2) If your pets are different level, at some point the entire team will be penalized. The penalty will be the equivalent of the opponent being one level lower, which is very significant (about 30% reduction in experience). Beyond about level 10, try to keep all of your pets the same level, unless you are power levelling a baby pet, in which case the experience penalty is worth paying.

Use the trainers and quests: At higher levels the experience grind is very slow. The fastest way to gain experience is to follow the quest line and defeat the trainers. Trainers award much more experience than opponents in the field. This means that you should maximize your experience from trainers, and avoid a situation where you waste the experience boost from lower level trainers by defeating them with a too high level team.

Do not waste time farming for many rare pets at low level: You will often capture the same pet at much higher level, and you will have to abandon the low level rare to make room for the higher level rare.

Plan your high level grind, not your low level grind: The first few levels are easy, it does not matter where you do them. At higher level, find a place with a nearby stable master to grind opponents that are equal or slightly weaker. The stable master is very important because higher level opponents will leave your team very weak, and you do not want to have to wait 8 minutes between each combat. For example, Winterspring is a good place to grind level 17 to 21 because there are many high level opponents available near to the Everlook stable master. Another good strategy is to grind using a herbalist and/or a miner, because you can make gold while you wait for the 8 minute cooldown.

Also while in the healing cooldown, don't be afraid to trade out the hurt pets for another one you intend to level later, then when you can heal, it heals all of your pets whether active or not. This way there isn't as much down time. 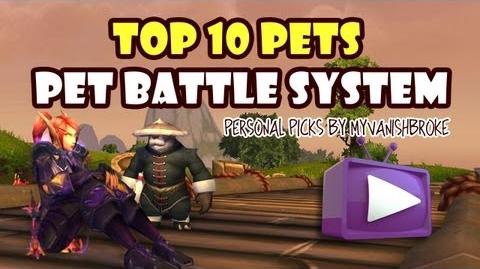 WoW Insider The OverAchiever: What we do and don't know about Pet Battles achievements by Allison Robert May 3rd 2012 at 3:00PM

Mists of Pandaria - General Discussions forum Pet battle system (speculative chart of types against each other) by pippen1001 2012-03-31 at 12:14 PM

WoW Insider A vision of Mists of Pandaria's Pet Battles by Mathew McCurley Feb 6th 2012 at 9:00AM