At Blizzard's Comic-Con 2010 panel, a slide of pandaren artwork was included at the end of Wildstorm's portion of the presentation. The panelists mocked surprise and quickly returned to the previous slide, saying it wasn't supposed to be there and that they'd get in trouble.[3]

The plot of the comic revolves around Chen Stormstout's niece, Li Li, as she ventures into the world with another unidentified pandaren warrior. A framed art preview was given out to fansite webmasters during the March 2012 Mists of Pandaria Press Tour. 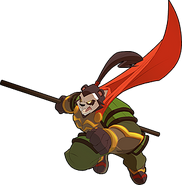 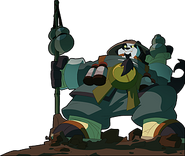 Traveling Chen with brew
Add a image to this gallery

Retrieved from "https://wowwiki.fandom.com/wiki/Pearl_of_Pandaria?oldid=2647631"
Community content is available under CC-BY-SA unless otherwise noted.